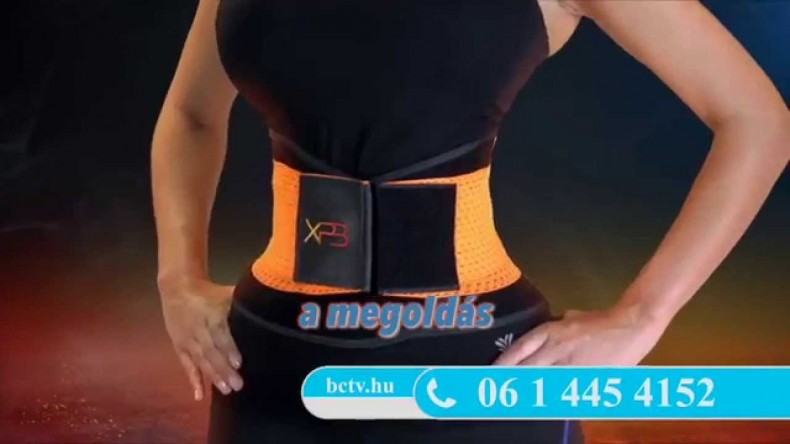 Xtreme Power Belt is a waist trainer with a sporty look and lofty claims. There is no evidence that you can spot-reduce fat in any area of the body, as the marketers of this product claim. While Xtreme Power Belt does provide instant slimming, its ability to provide any benefits beyond that is minimal.

From the official website, you can purchase Xtreme Power Belt for $89.00 + Free Shipping. You can’t opt out of 2 bonus Osmotic rolls. You may be able to find it on Amazon for less, such as this vendor selling it for $41 as of this writing.

You may find some earlier reviews which cite a higher price, although the current offer of $89 has not changed in at least a year.

The TV commercial below aired on Spanish language television as recently as early 2016. There are both English and Spanish versions of this particular television spot.

Xtreme Power Belt appeared throughout 2015 in television ads which extolled its virtues of producing an instantly slimmer look while allowing users to sweat away pounds.

This dual-use product is said to compress belly fat, which provides an instant slimming effect. Longer-term use, they say, also leads to increased sweating which also supposedly helps shed pounds.


On the good side, Xtreme Power Belt does provide an instant slimming effect by compressing fat in the midsection. The elastic material is comfortable and stylish. Wearing a device such as Xtreme Power Belt can help you focus on better posture, which is always a good thing. Some users have suggested that wearing a belt like this could provide temporary relief for certain minor back pains. This could be due to improved posture, a warmer core, or from compression support. It will not cure any underlying condition, however. Finally, wearing a belt around your waist can help  you to focus on your core while working out, which could have benefits that are peripherally related to Xtreme Power Belt.

Conversely, there is no way you can target fat loss in a certain area of the body. This is a fact proven again and again, yet marketers continue to champion products which make this erroneous claim. Just because you sweat in a particular area does not mean you will lose fat there. Genetics determines where your fat will go on first, and where it will come off first. A 2015 Livestrong article touched on this topic, writing:

According to the Los Angeles Times, studies have shown that slimming belts do increase the temperature of your stomach. But that doesn’t increase your fat burn, it only increases how much you sweat. According to Columbia University’s Go Ask Alice! website, lost water weight will return as soon as you rehydrate. McCall told the Los Angeles Times that exercisers may actually burn fewer calories when wearing these belts because they support your midsection, preventing your muscles from engaging.

When “testimonials” in the commercial above hint that a user went from a size six to a size four, it must be viewed with skepticism. There may have been other factors at play, or the person was merely speaking of the difference with and without the belt. Wearing Xtreme Power Belt will not cause you to lose weight or burn fat.

Despite the recent glut of new waist trainers, these are just the most recent in a long line of such products. In the early 2000s, there were a number of electronic waist trainers which supposedly allowed consumers to build abs by applying electronic stimulation. Those largely disappeared after the Federal Trade Commission got involved back in 2002 and began handing out fines. The current breed of waist trainers seem to be taking a more subtle approach in what they promise, and a number of celebrities jumped on the bandwagon in 2014 and 2015. Despite this, health care professionals have warned that long-term use of such devices could lead to health problems.

If you want to wear a corset, Xtreme Power Belt could be one of many options for you. It is, however, priced on the high end of the range and is not available locally (as of this writing), so you still must wait for it to arrive in the mail. Additionally, there are a number of complaints about aggressive or incompetent customer service reps in reviews around the internet. If you do want to try it, we suggest going through a third party vendor, such as the one linked above, or simply buying a corset locally from a trusted vendor.

There is no shortage of slimming waist products on the market, such as Miss Belt, V-Shape Trainer, and Genie Hourglass. Despite slightly different designs, and sometimes different claims in marketing, these products all fall into the same category, and could be loosely called corsets. Consumer ratings for these types of products tend to fall into the 3 star range, because they do provide instant slimming, but their ability to provide any long-term change is dubious.

You may be interested in reading more information about the effectiveness of so-called slimming belts.

Xtreme Power Belt is a waist trainer with a sporty look and lofty claims. There is no evidence that you can spot-reduce fat in any area of the body, as the marketers of this product claim. While Xtreme Power Belt does provide instant slimming, its ability to provide any benefits beyond that is minimal.

If you’ve used Xtreme Power Belt, please give it a star rating and comment below

CrossOver Abs Review: Does it Work?

PiYo Review: Pilates and Yoga Hybrid Workout
7.5
7.6
Be the first to comment!
Leave a reply »