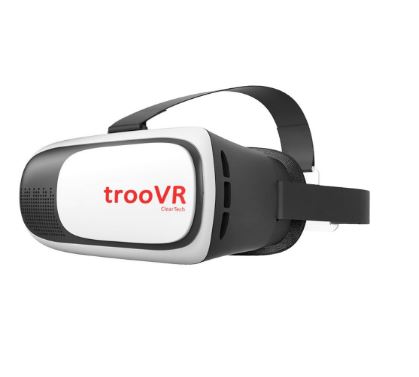 The trooVR Headset (Model TROOVR-001) is a virtual reality headset which allows you to experience VR with your smartphone.

This product costs $19.99 on Amazon, and we have not seen it in stores.

In July 2016, trooVR (Model TROOVR-001) surged toward the top of Amazon’s “Movers & Shakers” which is an impressive feat among the crowded field of VR headsets hitting the market.

Initial Amazon reviews are impressive, although it appears that most of those were given in exchange for a free or reduced cost product. Perhaps the most balanced of the early reviews notes:

The flaws:
– very thin brackets for the phone
– limited to 5.5″ instead of 6″ maximum. My OnePlus2 (5.5″) was very hard to fit and at the absolute limit of the size.
– The only thing preventing your 700$ phone from dropping to the ground is a small magnet … ouch …
– Last but biggest con: NO TRIGGER. They forgot to add a trigger. The Indian designers relied on some head-shaking control, but you can’t shake your head 1000 times during a game and focus on the right spot or direction. Even all the 15$ cardboards have this button. I don’t really understand, what they have been thinking about this design! At the end you will have to buy an extra Bluetooth controller for 30$ (which is recommended anyway …)

Unlike a number of other VR headsets, this particular model includes a cartridge-like loader where you place your smartphone. You place the edge of the phone against a spring loaded lever and push upward until the phone locks into place. This does a pretty good job of securing your phone while in use. Despite its snug fit, we suggest taking care while removing it from the headset to prevent it from falling out.

This model offers a modest 92-98 degree viewing angle, which is acceptable for this price range, but will not satisfy those who have used higher-end headsets.  It can handle most average smartphones up to about 6 inches in size. We found an iPhone 6s Plus worked, but one reviewer pointed out that his Nexus 5X did not.


There are two sliders on the top of the unit which allow you to focus the lenses individually. Our testers didn’t feel that wearing glasses was feasible, although this opinion seems to vary among users. The head strap offers the ability to adjust the headset to a comfortable fit, which we’ve found to be problematic in other VR headsets.

Perhaps the most glaring omission is that of a trigger, which some users feel is a necessity. The lack of a trigger means you will have to invest in a Bluetooth controller. This is an unfortunate oversight which could severely degrade your VR experience, depending on what app you are using (unless, of course, you do opt for a controller).

Google Cardboard compatible headsets can access thousands of apps and view numerous 360 videos on YouTube. You can even watch regular videos in what we would describe as a “movie theater” environment.

As we have mentioned before, there is a significant problem related to virtual reality in general: motion sickness. All of our testers at some point felt some degree of motion sickness after first using a VR headset. This varies from person to person and each individual experienced different effects. The types of apps or videos you watch can greatly affect this as well (static videos, for example, may cause little to no motion sickness). It has been suggested that taking Dramamine before a long VR session may reduce motion sickness.

VR Headsets are literally flooding the market as vendors jump in with their own offerings on a daily basis. This particular device is in the Google Cardboard class of headsets which use a smartphone. A search of VR Headsets on Amazon yields an overwhelming number of options, and this model was listed as a “Mover & Shaker” in July 2016.

You may be interested in our review of a Best Seller in this price range, the HooToo VR headset, model VR002.

A higher end phone-based headset is the theSamsung Gear VR. This unit runs about $90. It is considered the top of the line for smartphone-based VR headsets, but it only works with a small number of Android devices.

Obviously there are the high end headsets such as Oculus Rift and the HTC Vive, but these require a powerful computer. Sony is set to release a headset for the PS4 in late 2016 which is expected to compete with Oculus and HTC in the high end headset market.

Have you tried the trooVR virtual reality headset? Please give it a star rating and comment below.