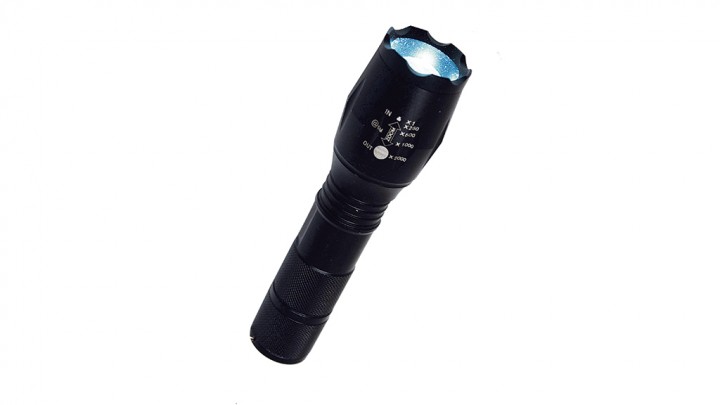 Atomic Beam USA is a standard tactical flashlight of average construction, although it should be durable enough for most users. If you plan to get the standard version which uses three AAA batteries, you are not getting the light at its full potential. Upgrading to the rechargeable battery, however, costs more and can't be achieved by shopping locally. If you've never used a tactical flashlight before, you may be impressed by Atomic Beam USA. For those who are more familiar with the genre of flashlights, Atomic Beam USA may not stand out above the fray.

Atomic Beam USA is a tactical flashlight which has advertised on television. It is touted as superior to regular flashlights, and includes a number of helpful modes. Here we present our Atomic Beam USA review.

The current television offer is $19.99 with free shipping for one Atomic Beam USA, or you can add a second for another $9.99.

The Deluxe TV Offer includes 2 flashlights with 2 rechargeable batteries and chargers for $56.96 with free shipping.

You can find the standard Atomic Beam USA in stores for about $20. As of this writing, we haven’t seen the Deluxe version (with rechargeable battery) in stores.

Transcript of the commercial above

It’s tough enough to withstand this 36-ton firetruck. We’re going to drop it hundreds of feet from this helicopter. It hits the tarmac and it’s still working. That’s what I call a tough flashlight.

Heavy downpours, mud puddles, even extreme temperatures like boiling hot oil or being frozen solid in a block of ice are no match. I can smash it with all my strength, and it keeps shining bright.

Its strobe feature makes it a powerful self-defense tool. Disorient attackers and protect yourself with the Atomic Beam USA.

It’s compact, lightweight. Take it anywhere you know you’re going to need it. In case of emergency, it has an SOS setting.

As a former fighter pilot I can depend on Atomic Beam USA. You can see it for miles on land, sea, or air. You can spend over $100 or the Atomic Beam USA can be yours for just $19.99. You’ll also get a lifetime guarantee. If it ever breaks, for any reason, you get your money back. And, if you order now, you can double it, and get a second Atomic Beam USA, just pay a separate fee. And we’ll even ship them to you for free. And the critical components inside the Atomic Beam are made right here in the USA.

Atomic Beam USA is advertised as a highly durable, ultra-bright flashlight which puts ordinary flashlights to shame. It features multiple modes and a zoom feature not found on regular flashlights.


Atomic Beam USA offers five modes: High, medium, low, strobe, and SOS. High mode is where you will see the impressive brightness shown in the advertising, but this brightness will take a toll on battery life. For regular use, medium and low modes are probably more than sufficient.

Strobe mode is touted as a way to avert attackers, but this would certainly only give a momentary advantage – if you happen to have your flashlight in hand at the crucial moment (while keeping in mind it takes about 6 clicks to get to that mode). We asked a police officer in California if he had ever used such a strobe feature, or heard of it being used, to thwart an attack. He told us that he had never used a strobe – or heard of anyone else using a strobe – in such a situation, nor has any of his training mentioned it as an option. The SOS mode may be of some benefit in limited situations such as when your car breaks down at night and you’re waiting for a tow truck.

The standard Atomic Beam USA uses three AAA batteries, which are not included. There is also an option for the Deluxe version to upgrade to a rechargeable lithium-ion battery. We are told that the AAA configuration does not perform to the standard of the lithium-ion battery. Because high mode can chew up batteries, the rechargeable battery seems to be the only feasible option regarding this product as a long-term investment.

You can adjust the beam to a narrow or wide focus. When zoomed in to the tightest setting, Atomic Beam USA has a somewhat unusual square beam, although when zoomed out the beam appears round. It is significantly brighter than an ordinary flashlight, and uses Cree LEDs which are made in the USA.

The durability of Atomic Beam USA seems to be the most debated online, but our multiple tests found that it can withstand being dropped, frozen, or submerged in water.

In the end, Atomic Beam USA delivers on its ability to outshine ordinary flashlights while offering increased durability. In that regard, it lives up to the promises of the advertising. It may not be at the top of the class in the tactical light category, but it is probably sufficient to the uninitiated, while less impressive to those well-versed in this type of product.

There is no shortage of tactical lights to be found in stores and online. In this price range, the J5 Tactical V1-Pro is an Amazon best seller, with a 4.5 star rating with over 6,500 reviews.

Slightly higher up the cost scale are brands such as Streamlight, which offer some of the finest tactical lights on the market.

You may also be interested in our review of the Shadowhawk X800 flashlight, which sports a similar design and advertising claims.

Atomic Beam USA is a standard tactical flashlight of average construction, although it should be durable enough for most users. If you plan to get the standard version which uses three AAA batteries, you are not getting the light at its full potential. Upgrading to the rechargeable battery, however, costs more and can’t be achieved by shopping locally. If you’ve never used a tactical flashlight before, you may be impressed by Atomic Beam USA. For those who are more familiar with the genre of flashlights, Atomic Beam USA may not stand out above the fray.

Have you tried Atomic Beam USA? Please give it a star rating and comment below.

2 people like this
As Seen on TV, Gadgets, New