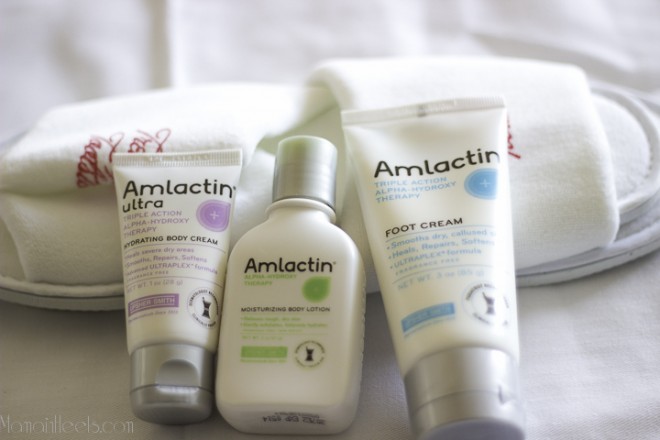 • May slightly and briefly feel a burning sensation on sensitive skin.
• Smells more like medicine (or even glue) than lotion

AmLactin is a line of skin care products which have amassed a legion of fans over the years. The current set of lotions are all very highly rated, and for good reason: they work. The fact that these products are also quite affordable make them a compelling choice. If you aren't sure which product to choose, the Moisturizing Body Lotion is the best bet, and the most versatile.

AmLactin is a popular line of hydrating lotions for dry skin.

You can find AmLactin products online and locally ranging from $7.50 up to about $37, depending on the vendor and the specific product.

The best choice to purchase AmLactin is locally in stores such as Costco. Be sure to print out coupons which are available on the official product website (by clicking the “Save Now” button).

As of this writing, the official AmLactin Amazon storefront offers the following prices:

AmLactin is a line of four skin care products. Below is a breakdown of the current AmLactin line.

This is the AmLactin product most consumers think of when discussing the AmLactin line. It contains 12% lactic acid, and is said to be pH-balanced. Benefits are exfoliation and deep moisturizing, while fragrance free and non-greasy. Sizes range from a 2 ounce trial size up to a 20 ounce bottle with pump.

As of this writing, the body lotion holds an impressive 4.3 star rating on Amazon. For best results, it should be applied daily.

The Moisturizing Body Lotion is the most popular AmLactin product for a reason: It works well. Consumers around the internet and from our own evaluation give this lotion a nearly unanimous thumbs-up. With deep, long-lasting moisturizing, it goes on smooth and absorbs quickly. This body lotion may help combat (though not cure) a host of issues related to dry skin, including Keratosis Pilaris and eczema. The gentle exfoliation leaves your skin soft and smooth.

Keep in mind that due to its active ingredients, there may be a mild burning sensation, especially if you have abrasions or sensitive skin.

This is an OTC product that some dermatologists recommend, which itself speaks volumes. Price-wise, AmLactin Body Lotion is quite competitive, and in some cases less expensive than competing skin care products.

Overall, this is a world-class moisturizer with an affordable price tag.

Note: It is an oddity that popular beauty site Paula’s Choice gave AmLactin a 2 star rating from editors, although the site’s community gives it nearly 5 stars. The editors there write, “If you have dry skin and are considering this product, know that there are much better formulas that contain a wide complement of ingredients dry skin needs to repair itself and become healthier.”

WebMD describes the product in the following manner: “This medication is used to treat dry, scaly skin conditions (e.g., xerosis, ichthyosis vulgaris) and can also help relieve itching from these conditions. This medication works by increasing the moisture in the skin.” We are also warned to avoid eyes, lips, inside mouth/nose, vaginal area, or areas of broken skin.

Costco currently shows a 4.6 star rating for this product. The small minority of complaints tend to focus on the smell of the product, which admittedly is not as pleasant as one may expect with other popular lotions.

The Restoring Body Lotion contains their patented ULTRAPLEX formula and three ceramides. It is designed for rough, flaky, dry skin, although results are said to be instant and visible.

Sizes range from a 2 ounce trial to a 7.9 ounce bottle with pump.

Although it is hard to compete with the original AmLactin body lotion, the line does offer another solution in its Restoring Body Lotion. As you can see from the ingredients, there are a number of differences, although consumers only care about the end product. We find this to be a fine choice as well, although not as tried and true as the original. It may seem a bit thicker and have a less pleasant odor, but by itself the Restoring Body Lotion does a fine job of moisturizing and helping to address dry skin. Because of its thickness, a small amount can go a long way.

This product also contains the patented ULTRAPLEX formula, along with “triple action alpha-hydroxy therapy.” Keep in mind that alpha-hydroxy could increase your sensitivty to sunburn, so you’ll want to avoid sun exposure for up to a week after using this product. Apply twice a day.

The AmLactin body cream is quite thick and absorbs deeply. Hydration is impressive, although some consumers have said it feels a bit too sticky for their tastes. It is so thick that you may have to cut the tube open to access the contents when it gets toward the end. This is an excellent choice of an after-shower lotion to help your skin stay hydrated and moisturized. We like it for arms, hands, feet, and legs. If you have dry, cracked skin, this body cream should be on your short list.

At Drugstore.com, the Body Cream currently has a 4.6 star rating among consumers there.

As with other AmLactin products, the Foot Cream includes their ULTRAPLEX formula and triple action alpha-hydroxy therapy.

A prescription version used to be prescribed by podiatrists. With a formula that concentrates on dry, cracked feet, AmLactin delivers yet another solid offering that is coveted by those who require intense hydration for their feet.

Perhaps one aspect which is not addressed is how some of the AmLactin products differ from one another. Indeed, the Body Cream and Foot Cream have the same ingredients, so it would appear that these could be used interchangeably.

We have yet to see a consensus consumer rating for AmLactin under 4 stars. Virtually every vendor, for every AmLactin product, boasts 4+ star ratings. You may find an occasional critic, such as the Paula’s Choice review cited above, but those voices are drowned out by the chorus of praise for AmLactin. Had this been a new product, we may have been suspicious of such a lopsided consumer reaction. AmLactin is not a new product, however, and its track record dates back years. It was a popular choice among doctors when a prescription version was available, and the current expanded line is an impressive set of skin care products. You shouldn’t expect any of these to have that beauty store “lotion” smell or look, but they deliver impressive results.


Some users feel that AmLactin may be too strong to use on the face, whether because the chemical/glue smell, or because of the slight stinging sensation it can provide. If you plan to use it on your face, you may want to try a very small amount before slathering on a large quantity. If you are highly sensitive to strong smells, you might want to seek out a sample locally before purchasing. If you don’t think you can handle the smell, you may want to look into alternatives before going with AmLactin.

Some AmLactin products are said to feel sticky, which is not unreasonable due to the thickness of these lotions. Because it absorbs rather quickly, the stickiness is only temporary.

Many users have said that AmLactin products work optimally when allowed to absorb overnight. Thus, applying to the feet, then donning a pair of socks before bed, for example, will maximize the benefit. Using AmLactin right out of the shower is also another popular option.

Although acne is not specifically cited as a use for AmLactin, Acne.org does include a listing for it, and users there give the product a 4.4 star rating. Those who found it useful stated that daily use of AmLactin helped reduce some problems associated with acne and dry skin.

Pro tip: Don’t apply AmLactin right after shaving your legs. The skin at this time will be more sensitive to the burning sensation, and it could feel quite unpleasant.

Where to buy AmLactin?

As noted above, you can find AmLactin at a wide variety of local vendors, from grocery stores to Walmart. The best prices can be found at discount locations such as Costco, and you can find coupons on the AmLactin website. There are a number of online vendors which also sell it, although their official product website is competitive with third party vendors.

There are obviously a nearly endless supply of lotions and creams on the market. Few, however, boast the healing and restorative properties of AmLactin. You may be interested in Elaj if you have eczema, which is a rather highly rated product. For dry hands, another industry standard is O’Keeffe’s Working Hands, which works well and is also competitively priced.

As you can see from the Google Trends chart below, AmLactin has been a popular search phrase for years. It appears to be having a sort of resurgence lately, as popularity has slowly increased since about 2009.

AmLactin is a line of skin care products which have amassed a legion of fans over the years. The current set of lotions are all very highly rated, and for good reason: they work. The fact that these products are also quite affordable make them a compelling choice. If you aren’t sure which product to choose, the Moisturizing Body Lotion is the best bet, and the most versatile. Although not a cure, there are a number of sufferers of Keratosis Pilaris and acne who believe that AmLactin products lessen their symptoms considerably.

If you’ve used AmLactin, please give it a star rating and comment below.