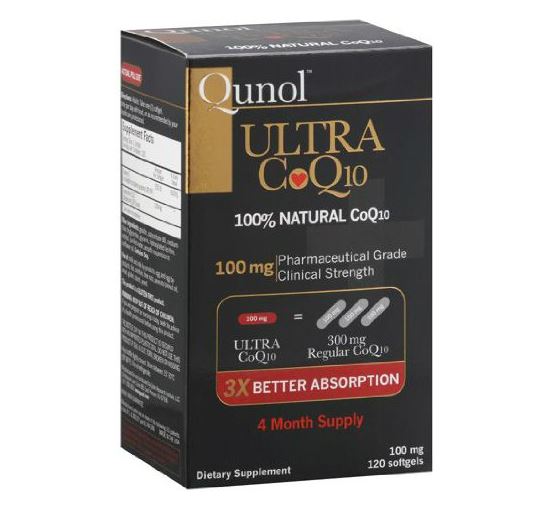 Qunol Ultra CoQ10 is a highly-rated supplement that is competitively priced, and the overwhelming consensus is positive. The inclusion of Vitamin E and the size of the softgels are potential problems for the minority of consumers.

Qunol Ultra CoQ10 is a highly advertised CoQ10 supplement that is said to be water and fat soluble, and superior to competing products.

Qunol is widely available online and in stores,and prices vary considerably. We’ve seen it for $13 for a one month supply to $26 for a 4 month supply. It may pay to shop around.

You may also want to check the official website qunol.com as there are often printable coupons posted there.

You can find this product on Amazon marked down for about $30 for 120 soft-gels. It currently holds a 4.5 star rating with over 500 customer reviews. See the product page here.

The TV commercial below aired throughout most of 2015 and into 2016.

Cholesterol lowering statin drugs can reduce your natural CoQ10 levels, but your heart needs CoQ10. Take Qunol CoQ10. It dissolves completely and absorbs three times better than regular CoQ10. Get the better CoQ10. Get Qunol, the gold standard in CoQ10.

There are two forms of CoQ10 – ubiquinone and ubiquinol – and there is some debate as to whether or not one of these forms is superior to the other. Some feel that one is in superior, while others believe they are essentially equal. As the Cleveland Heart Lab writes, “Most dietary supplements contain ubiquinone and are relatively cost effective. Unfortunately, supplements containing ubiquinol, which may be of most benefit as we age, may not be as easy to find and may cost a lot more.”

Nature Made, on the other hand, states that “both forms – ubiquinone and ubiquinol – are effective and essential to important pathways in the body, and in states of need, either form can be reduced or oxidized to form the other.” Qunol CoQ10 contains 100mg of the Ubiquinone form of CoQ10, as shown on the label below. The name seems somewhat ironic, as it closely resembles the form of CoQ10 that it is not: Qunol vs ubiquinol. It has been suggested that the form of CoQ10 matters less with younger people, while older consumers may want to try ubiquinol over ubiquinone.


Qunol CoQ10 made ConsumerLabs’ list of top-rated supplement brands on overall consumer satisfaction in 2015, although a competing CoQ10 product made it on their list of specific supplements. As stated above, Qunol Ultra CoQ10 boasts a 4.5 star rating with over 500 reviews on Amazon. 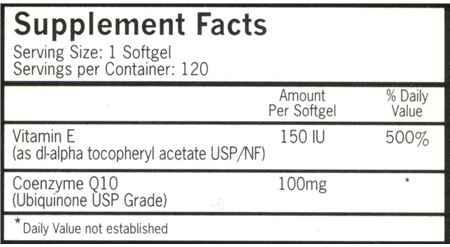 A supplement boasting long-term benefits is always difficult to objectively review, as results are slow to achieve and highly subjective. That said, Qunol Ultra CoQ10 has garnered a large body of popular reviews online, with consumers claiming that it works as advertised and that it is priced competitively. While the benefits of CoQ10 are beyond the scope of this review, its benefits related to heart health and a variety of other afflictions are widely accepted.

In pill form, despite being gel caps, the pills are quite large. Those who have difficultly swallowing large pills may want to look into the more expensive liquid form, or evaluate the size of the pills before purchasing a large quantity.

The Google Trends chart below shows search history of Qunol CoQ10. As you can see, interest began in mid-2010 and slowly rose until late 2015 when interest surged significantly. This is probably due to a television advertising campaign.

Qunol Ultra CoQ10 is a highly-rated supplement that is competitively priced, and the overwhelming consensus is positive. The inclusion of Vitamin E and the size of the softgels are potential problems for the minority of consumers.

If you’ve used Qunol Ultra CoQ10, please give it a star rating and comment below.

If you are interested in purchasing Qunol CoQ10, you can find it on their Amazon storefront, found here.

Note: This review has been updated since its original publication in July 2015.

bmiSMART Review: Does it Work?
Be the first to comment!
Leave a reply »