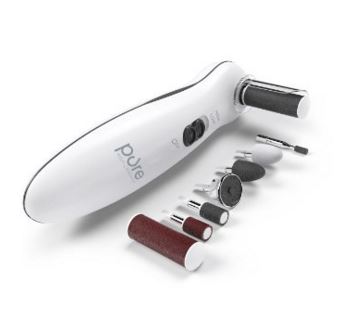 • No storage case
• Batteries not included

PurePedi is an excellent tool to achieve near professional level manicure results. The attachments offer a wide variety of potential uses, and the motor is strong, even when pressure is applied. This should be your starting point when seeking out at-home manicure sets in its price range.

PurePedi Deluxe is an 8-in-1 personal manicure and pedicure kit, featuring a roller as its main tool.

PurePedi Deluxe can be found on Amazon for about $40, although the list price is $80.

PurePedi Deluxe first came to our attention while reviewing two similar product, Personal Pedi and Roto Clipper. While those As Seen on TV product gained high profile attention due to a significant advertising campaign, PurePedi Deluxe has remained under the radar, which is unfortunate for consumers.

Whereas its As Seen on TV counterparts look good in the advertising, but generally fail to deliver a solid product, PurePedi actually delivers on its advertised promises.


There are 8 attachments for a variety of functions, although it appears that most consumers tend to stick with only one or two favorites:

The inclusion of a protective cap is a nice addition. This prevents particles from flying as you use the device, which will happen.

Overall, this is an excellent choice for its price range. The motor seems to hold up quite well, even under pressure. This was surprising since there were only two AA batteries powering the unit.

There are only a few “cons” we could compile for this product. The lack of a carry or storage case is unfortunate, as you are relegated to just placing everything on the counter. Traveling with the product means you must find somewhere to store it. Additionally, it would have been nice to have the two required AA batteries included in the box.

Pro tip: Use over a towel so you can collect particles that are created during use.

As noted earlier, there have been several As Seen on TV manicure products advertised in recent years, such as Personal Pedi and Roto Clipper. Those products have received mixed reviews, with negative comments stating the motors were not strong enough.

PurePedi is an excellent tool to achieve near professional level manicure results. The attachments offer a wide variety of potential uses, and the motor is strong, even when pressure is applied. This should be your starting point when seeking out at-home manicure sets in its price range.

If you’ve used PurePedi Deluxe, please give it a star rating and comment below.

VAV Mini Hair Dryer Review: Does it Work?
Be the first to comment!
Leave a reply »