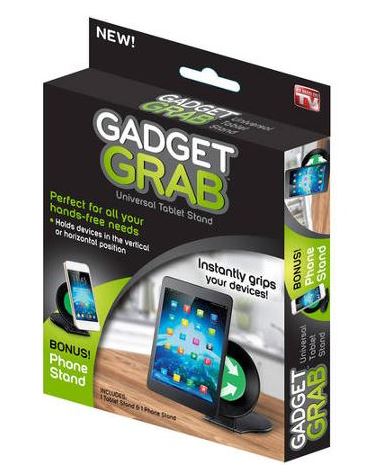 • Compact design
• Sticks to most devices

• Polymer surface may not stick to some cell phone cases.

Gadget Grab delivers a simple yet effective tablet and smart phone stand. Aside from the instances where a device's case prevented it from properly sticking, we found Gadget Grab to work about as expected. It's not the only game in town, but certainly a worthy entrant in the field.

Gadget Grab is a tablet and smart phone holder which is advertised on TV.

Gadget Grab costs $10 + $4.95 shipping. This includes 2 units, large and small for tablet or phone. You are also required to pay another $4.95 shipping for a second set, which brings your total to $19.90. You may also find it in some stores such as Walmart for about $10.

The TV commercial below has been airing as of August 2015.

Tablet and smart phone holders are rather ubiquitous accessories in today’s tech market. The commercial for Gadget Grab is correct in that people think nothing of buying an $800 tablet only to prop it up precariously on a pillow.

Enter Gadget Grab, a product which offers a sticky polymer surface on which your tablet or smart phone can rest. The design is simple, yet mostly effective. Fortunately, the makers of Gadget Grab decided to include a smaller phone stand in the box, so you’ll get two units to suit your needs.

As stated, we found that Gadget Grab worked in most cases. There were, however, a few unexpected instances where the results were less than optimal. This was often due to a tablet or phone with a case which did not stick. Notice that in the commercials, the devices are shown without cases, although most people do have cases on such devices. A rhinestone cell phone case, for example, did not stay on the phone stand.

If you are not using a case, Gadget Grab will likely perform as expected.

As Seen on TV aficionados may remember a product called GripGo, which was an automotive smartphone holder. It featured a similar green surface and operated under the same principle. That product was plagued by a weak suction cup, which is not relevant in the case of Gadget Grab. Another As Seen on TV product in recent years was GoGo Pillow, a sort of pillow/holder combo. That disappeared rather quickly.

You can find a wealth of tablet holders on Amazon, typically ranging from $10-$20.

Gadget Grab delivers a simple yet effective tablet and smart phone stand. Aside from the instances where a device’s case prevented it from properly sticking, we found Gadget Grab to work about as expected. It’s not the only game in town, but certainly a worthy entrant in the field.

If you’ve used Gadget Grab, please give it a star rating and comment below.