The Mirage Las Vegas: Reviews and Tips for 2016 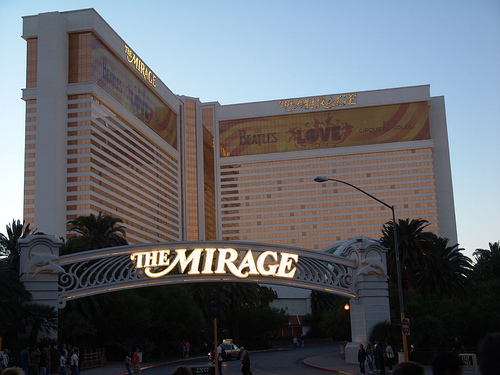 • Some rooms showing their age.
• Pool can get crowded during peak hours.
• WiFi connection varies across the resort.
• Cab lines tend to get long.

The Mirage marked the beginning of New Las Vegas. It still stands on its own among larger resorts built years later, and still boasts very high customer satisfaction ratings.

The Mirage marked a turning point in Las Vegas Strip history, becoming the first modern mega-resort to grace the landscape upon its opening in November 1989. At the time, it was the most expensive hotel-casino in the world, built at a cost of $630 million. It was the flagship Strip project of Steve Wynn, who was involved in the property’s design and construction. The resort’s erupting volcano became one of the city’s must-see attractions, and the hotel’s elegance was unique among the older casinos which still resided on the Strip at that time. Today The Mirage is right at home among the mammoth resorts which were built around it.

The video below gives a glimpse inside The Mirage.

The Mirage was the New Beginning

When I stand and marvel at the breathtaking Las Vegas Strip, I remember that it was The Mirage which began the city’s face-lift in the waning days of the 1980’s. I remember visiting Las Vegas in 1989 and staying at The Marina (where the MGM Grand now stands) and seeing The Mirage under construction. It was just different from many of the aging resorts which populated the Strip at that time. Once it opened its doors, it also opened the floodgates to a reinvigorated Las Vegas. Mr. Wynn had knocked one out of the park, and he took his rinse-and-repeat strategy to extremes, demolishing most of old Vegas in just a matter of a few years. Although Wynn later upped the ante with the Bellagio, Wynn, and Encore resorts, The Mirage was not only a triumph, but a revolution. To walk through the property today, one does not get the sense that it was constructed in the 1980’s, because it has the look and feel of a modern Strip resort. It was simply far ahead of its time. For 13 years, Siegfried and Roy graced The Mirage with their iconic act, which ended when Roy Horn was tragically injured by a tiger on stage.

OK, so the property began what would be become modern Vegas, but how does it compare in 2015? You can still find top-level Vegas shows, such as The Beatles: LOVE, which was given a stamp of approval of by the remaining Beatles – and features music by The Beatles remixed by George Martin himself. The show features 360-degree seating. When ventriloquist Terry Fator isn’t performing, you can catch 90’s vocal group Boyz II Men gracing the Terry Fator Theater stage. The Mirage pool is still one of the best in Vegas, complete with lush waterfalls. Drinks are also known to be a little more affordable at The Mirage pool than at other Strip resorts. I’ve had several friends stay here over the years, and have heard nothing but praise for the staff. The only complaints I’ve heard about The Mirage is that its line of cabs out front can get long, leading to overwhelmed valets and bellhops. There have also been those who have reported that Internet access can be weaker in some areas of the resort than others.

Here is a map showing The Mirage’s location on the Las Vegas Strip.

Latest Tweets from The Mirage

Monte Carlo Las Vegas Reviews
7.8
0.0
Be the first to comment!
Leave a reply »