CrossOver Abs Review: Does it Work? 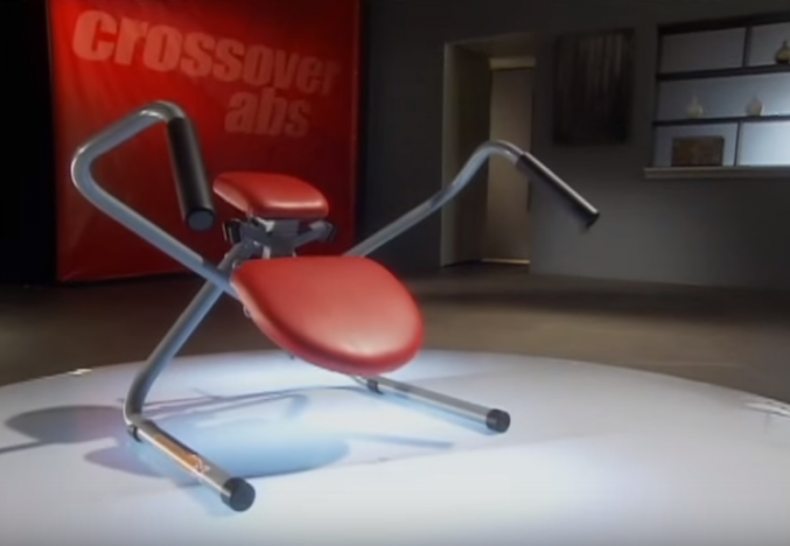 • Weight loss cannot be targeted to a specific area.
• Unresponsive customer service
• Not a comprehensive exercise or weight loss solution

CrossOver Abs is a machine which allows you to perform a twisting motion in order to work core muscles. Results will rely on calorie reduction and a more comprehensive exercise plan by the user. As a core exercise machine, it performs moderately well, although the resistance is minimal and leaves no room for adjustment. For such a specialized piece of equipment, the cost may not be justified to some consumers.

CrossOver Abs is an abdomen-based weight loss machine that transforms your entire core.

CrossOver Abs is an exercise apparatus which targets the core. Results are said to be achieved in only 5 to 6 minutes per day. It works by allowing the user to recline onto the padded back rest and twist the torso, building core muscles and increasing definition.

The current ad for CrossOver Ads likens the product to a “health club version” which shows a man using a weighted machine. CrossOver Abs, however, does not include adjustable resistance, only a “resistance link” that is not defined beyond that. The amount of resistance is minimal, and – like other exercise resistance bands – it provides the greatest resistance as the very extreme end of the motion. This means that the bulk of the twisting motion has minimal resistance.


It does appear that CrossOver Abs provides for some core exercises that are easier to achieve with this device than through other methods. It is not, however, a comprehensive solution. Even the before and after photos on the product website admit to being a result of a “reduced-calorie eating plan.” Additionally, it is not possible to spot-reduce for targeted weight loss. Thus, your body will burn calories wherever it chooses, regardless of what muscles you work.

CrossOver Abs may look smaller in person that it appears on the website or in television advertising. This doesn’t affect its performance, but you will find the handles closely surrounding your head as you use it, which isn’t readily apparent from the advertising (see the screenshot below, which also shows the lower back against the ground). 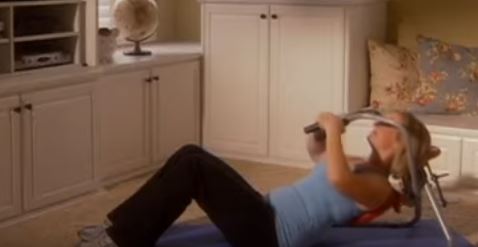 Other positive features include a back rest that is adjustable to accommodate a variety of heights and weights. You also receive a 30-day plan and bonus DVDs.

Oddly, although this product has been around for at least six years, it is difficult to find recent reviews for the device. There appeared to be a cluster of negative comments years ago by customers who said they did not receive the product or had difficultly reaching customer service, but there are scant reviews after about 2013. The product has been advertising with earnest in 2016.

At about $120, CrossOver Abs is somewhat expensive for being such a specialized device with only minimal resistance provided by a single band. Results will be highly dependent on your ability to reduce your calorie intake in addition to using this device and getting other exercise.

There is no shortage of exercises machines which are said to target the stomach area. The Ab-Doer Twist Abdominal Trainer is one of the closer models to CrossOver Abs in that it also requires a twisting motion. That product has relatively positive reviews and a 3.7 star rating as of this writing.

You may also be interested in our review of Ab Slim Flex, with is another core-focused exercise machine. It has a 3.5 star rating among the readers here at Epic Reviews.

CrossOver Abs is a machine which allows you to perform a twisting motion in order to work core muscles. Results will rely on calorie reduction and a more comprehensive exercise plan by the user. As a core exercise machine, it performs moderately well, although the resistance is minimal and leaves no room for adjustment. For such a specialized piece of equipment, the cost may not be justified to some consumers.

If you’ve used CrossOver Abs, please give it a star rating and comment below.

PiYo Review: Pilates and Yoga Hybrid Workout
7.5
7.6
Be the first to comment!
Leave a reply »