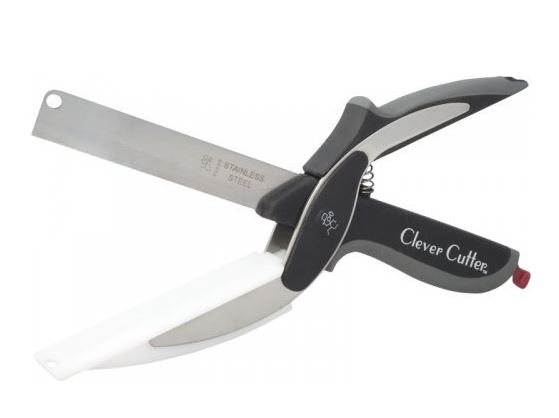 Although you shouldn't expect to throw away your kitchen knives upon the purchase of Clever Cutter, you may find that it does have some uses for which it is better suited than others. With realistic expectations, it isn't a bad product.

Clever Cutter is an As Seen on TV kitchen utensil which acts as a knife and cutting board, but operates more like a pair of scissors to cut food. I’ve actually used the product and here I present my Clever Cutter review.

Although Clever Cutter has been advertising heavily on TV in mid-2016, this particular item has been around for several years. After a brief absence, it returned in 2016 with a full advertising campaign that has continued into 2017.

The official product website is buyclevercutter.com, which was first registered in July 2015.

What does it cost?

If you purchase from the official website, Clever Cutter will cost you $14.99 plus another $5.99 P&H. There is a “double offer” which adds another cutter for an additional $5.99 – and you can’t opt out of this offer. A bonus peeler is also thrown in for good measure. This brings your total price to $26.97 for two cutters and a peeler.

There is an option to upgrade your two cutters to a higher grade steel for $5 per cutter ($10 total).

You can find Clever Cutter in stores such as Bed Bath & Beyond for about $15.

Clever Cutter is advertised as a “2-in-1 Knife and Cutting Board” which operates like a pair of scissors. This product was introduced a few years ago and then disappeared. In 2016 it reappeared with a vigorous advertising campaign extolling its virtues as a versatile kitchen tool.


I was fortunate enough to find a Clever Cutter at a local Bed Bath & Beyond for $14.99 and gave it a whirl. Below are some of my observations about the product:

When it works, it works well.

If you have realistic expectations, and understand that it may not work perfectly on all of the food types shown in the advertising, you may find a place for Clever Cutter in your kitchen. It’s actually a pretty good item to use when you need to cut something quickly and don’t feel like hauling out a knife and cutting board.

Check out my hands-on video review of Clever Cutter below.

When I do a product review, I will typically research similar products, but there really isn’t anything like Clever Cutter. Sure, you can pick up a good pair of kitchen shears or scissors, but the built-in cutting board is not something I’ve found in any other product.

There are a couple of knockoffs which have recently arrived on the scene. One such item is Lifine Cutter, which is a virtual carbon copy of Clever Cutter. Another is the Sinbad Food Chopper. I haven’t evaluated either of those products to see if they have addressed any of the problems with Clever Cutter.

Although you shouldn’t expect to throw away your kitchen knives upon the purchase of Clever Cutter, you may find that it does have some uses for which it is better suited than others. With realistic expectations, it isn’t a bad product.