Daily Burn Review: Does it Deliver a Good Workout? 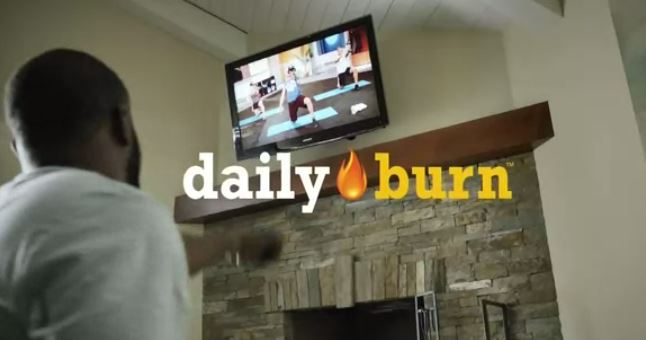 • Videos can be streamed to many different types of devices.
• Large selection of workout and diet options
• Well-tailored to individual needs
• Multiple ways to access information and videos
• No contract

DailyBurn has amassed overall positive reviews, with its large selection of workout routines for a variety of fitness levels. It does require some self-motivation, but provides relatively inexpensive access to an impressive library of fitness materials.

DailyBurn is a subscription workout program tailor made for subscribers. How well does it work? We take a look.

The current cost of DailyBurn is listed at $12.95 per month, and there is a 30-day free trial, which includes access to all videos and the DailyBurn community. You can also pay extra for a personal coach, which is another $15 per month.

DailyBurn has been seen on television and other streaming services such as Hulu over the past year. The ad below has been airing as of August 2015.

In what is perhaps billed as a replacement for traditional gyms, DailyBurn is a digital fitness assistant which offers a large library of exercise videos and meal plans. The official website is DailyBurn.com, which was first registered back in 2004. There is unfortunately little data on th site other than a 1-minute video, signup form, and testimonials. It would be nice to have screenshots, price, and other vital information listed before requiring an email address.

That said, the signup process is relatively painless: You simply fill out a short series of questions in order to begin your tailored exercise program.


Videos from Daily Burn are offered by expert trainers, and are not unlike some of the expensive workout programs peddled in late-night television infomercials. Some popular videos include Cardio Sculpt, Tactical Bodyweight Training, and Inferno – a 21-day high-intensity program. All levels of workouts are represented, and if you have considered purchasing one of those expensive workout systems but didn’t want to pull the trigger, this may give you a good chance to try at-home workouts for a small investment.

The variety of workouts offered should be sufficient for most consumers, including body weight exercises, dancing, dumb bells, kettle bells, kickboxing, Pilates, and yoga.

Some workouts may require additional equipment, such as kettle bells, and some of the nutritional plans may recommend certain supplements. If you choose to follow those recommendations to the letter, you could end up shelling out more money than originally expected.

You can access from a variety of different devices, including connected TV’s, Android, Roku, Xbox, Playstation, Kindle, iOS, etc.

If you are motivated enough to check the app every day, DailyBurn may be worth checking out. We have heard of some consumer complaints regarding the billing process, specifically difficulty in reaching a live operator to cancel membership. As with any membership, you will want to be diligent in membership management.

Around the internet, reviews for DailyBurn as mostly positive:

DailyBurn has amassed overall positive reviews, with its large selection of workout routines for a variety of fitness levels. It does require some self-motivation, but provides relatively inexpensive access to an impressive library of fitness materials.

Have you used DailyBurn? Tell us your thoughts below.

Details about this review
1 person likes this
Fitness, New