Sprinkler 360 Reviews: Can it Deliver? 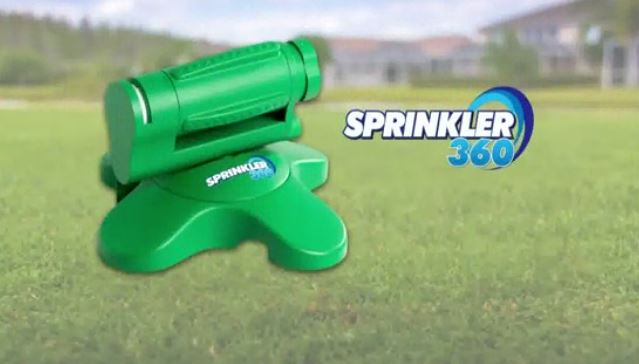 • Durability may be questionable due to construction completely of plastic.
• Learning curve to find the right pattern for your needs

Sprinkler 360 is an innovative adjustable sprinkler system. It has been generally well-received and said to work mostly as advertised, although there are some long-term durability concerns related to its plastic materials. We do like the features, and hope that durability does not become a problem for the product.

Sprinkler 360 is an As Seen on TV sprinkler system which is advertised as a way to more efficiently water lawns, with less waste and more precise coverage.

As of this writing, we haven’t seen Sprinkler 360 in stores.

The TV commercial below originally aired in mid-2015.

Sprinkler 360 entered a rather crowded and established field of lawn and garden sprinkler heads when it first hit the airwaves in 2015. While it does appear to sport some unique features, the same can be said for other unique sprinkler heads on the market. With that in mind, our product researchers feel that Sprinkler 360 will likely gain positive marks for its design and innovation, but may suffer from negative reviews due to two concerns: Slow shipping and the fact that it is made entirely of plastic.


When Sprinkler 360 first appeared on the scene in mid-2015, it suffered from slow shipping which is typical for a new As Seen on TV product. Although shipping delays eventually disappeared as the product ramped up into full production, those early reviews still negatively impact the product’s overall consumer rating.

The other area of concern is that Sprinkler 360 is made almost entirely of plastic, which could present some durability concerns to some consumers. Most traditional sprinklers combine plastic and metal parts for long-term viability. It remains to be seen if the majority of consumers are satisfied with the durability of this product.

Now that Sprinkler 360 has endured two warm seasons, consumer reviews have confirmed that it does in fact work generally as advertised. There is something of a learning curve when trying to determine which pattern is best for any given area, but overall we have seen mostly positive reviews over a year since we first reviewed Sprinkler 360.

Sprinklers of varying sizes and shapes can be found at any lawn and garden center. The variety of designs to be found is virtually endless. It may pay to shop around, as many of these sprinklers can be obtained locally for considerably less than the $27 advertised price. Searching for “Sprinkler 360” on Amazon, for example, will yield a rather impressive array of competent products.

Sprinkler 360 is an innovative adjustable sprinkler system. It has been generally well-received and said to work mostly as advertised, although there are some long-term durability concerns related to its plastic materials. We do like the features, and hope that durability does not become a problem for the product.

If you’ve used Sprinkler 360, please give it a star rating and comment below.