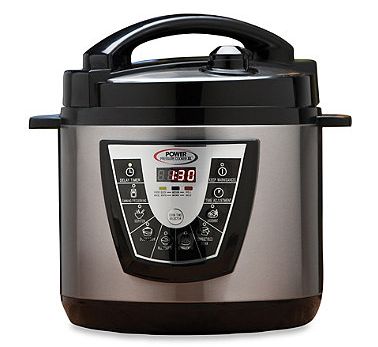 • Can be difficult to clean.
• Takes time to pressurize, which must be added to cooking time.
• Expensive shipping when purchasing online.

Power Pressure Cooker XL is a competent pressure cooker in a crowded field. The merits of the product have been largely overshadowed by slow and expensive shipping costs and delays. The product is available locally, and it is recommended to purchase this way to avoid shipping delays, and facilitating the return process if needed.

Power Pressure Cooker XL is a product which is advertised as a way to quickly prepare meals in a fraction of the time it would normally take in a slow cooker.

The official website is powerpressurecooker.com, which was registered in October 2013.

How much does Power Pressure Cooker XL Cost?

The following prices are quoted on the official website in January 2016:

Each model listed above include bonus items such as a recipe book, canning guide, access to online library and videos, etc.

6-year and 3-year extended warranties are offered for $30 and $15 respectively.

You can find Power Pressure Cooker XL in stores such as Bed Bath and Beyond for about $100, or on sale as low as about $80. Savvy Bed Bath and Beyond shoppers may want to keep an eye out for their coveted 20% off coupon should they decide to use it for this purchase, which would save as much as $20.

Transcript of television commercial above

Remember when your family would gather together for that home-cooked Sunday family dinner? But nowadays, who has the time to prepare all that food, and then soak and scrape pots and pans for hours? Now, what if you could prepare a wholesome sit-down family style meal with just a push of a button, and do it in a fraction of the time? Introducing the Power Pressure Cooker XL, the amazing push button kitchen miracle that lets you prepare that succulent, perfectly cooked family roast in 25 minutes, or a pot-full of mouthwatering meatballs in 15 minutes, or how about a classic homemade lasagna, oozing with cheese in 20 minutes. This is power cooking.

The secret is Power Pressure Cooker’s air tight lid that locks into place, trapping super-heated steam inside. The hyper pressurized environment forces liquid and moisture into your food, locking in intense flavor and nutrients. And thanks to Power Pressure Cooker’s on-board intelligent technology, your food cooks fast, and your exact specifications for the best tasting meals ever.

Imagine the tenderest most savory fall off the bone ribs, 10-times faster. And what a capacity. You’ll feed a small army. Insanely tender and flavorful chicken wings from frozen to steaming in just 10 minutes. A gourmet seafood feast in 15 minutes. Hearty, homemade chunky soups in under 10 minutes. Choose from one-touch push button settings for meats, fish and vegetables, beans, rice, soups or stews. Do your steamed vegetables look like this? Soft and overcooked. Wouldn’t you rather have this? Crisp al dente vegetables loaded with nutrients, done in 2 minutes. A tender shredded pulled pork, cooked to perfection 10 times faster. Or cooked dry pasta right out of the box in its own sauce without having to boil water, table ready in just 5 minutes. Perfect rice: white, brown, or wild, in as little as 6 minutes. Tasty, one pot chili ready to serve in 20 minutes. The Power Pressure Cooker XL’s incredible 6 quart capacity allows you to cook hearty, fill-up your plate meals, that will have them coming back for more. And look, touch a button to set that delay timer and eat when you want to. Even use the Power Pressure Cooker XL for canning, perfect for fruits, vegetables, meats, and more. Meets USDA standards for canning, and clean-up is a breeze. Just drop the removable insert into the dishwasher. The Power Pressure Cooker XL is the one button, one pot kitchen miracle that makes delicious homemade meals everyone will enjoy.

I should point out that the television commercial shows a woman placing a canning jar on its side, which is certainly not the correct way to do this, as it can compromise the seal.

Power Pressure Cooker XL has been seen in paid programming spots as recently as January 2016.

Initial online complaints surrounding the Power Pressure Cooker XL tended to focus mostly on shipping delays and costs rather than the merits of the product itself. As the product became more readily available, reviews tended to be more positive. Some consumers have expressed satisfaction with the product while others have cited specific reasons that they did not like it.


Customers on the Bed Bath and Beyond website, as of January 2016, give the product 4 stars, while Amazon customers rate it 4.1 stars.

Perhaps my biggest concern is that of cleaning. Some consumers have echoed my concern that the product is more difficult to clean than expected. It is Teflon coated, which some consumers do not like.

Another issue worth mentioning is that the cooker does take about 15 minutes to build up pressure, and this time should be factored into your cooking schedule. Thus, when the advertising states that a roast can be cooked in 25 minutes, this does not include the approximately 15 it takes to properly heat and pressurize. A few users have expressed concerns about the lid locking or unlocking properly, but we did not experience this first-hand.

Other than the few caveats above, I found the product to generally work as advertised. It is simple to use, and I especially like options such as slow cooking and “keep warm” which expands the usefulness of the product. If purchased locally, I feel most consumers will find this to be a worthwhile investment.

In short, the Power Pressure Cooker XL delivers results of a slower cooker in a fraction of the time. A few consumer complaints should be considered, but shouldn’t dissuade most customers from giving it a try.

There are dozens of pressure cookers on the market. Bed, Bath, & Beyond and JCPenny have multiple pressure cookers for sale, all costing about $100. The Cuisinart 6-quart Pressure Cooker, for example, has universally positive ratings by a large number of consumers around the internet – and can be found locally.

The Emeril by T-Fal pressure cooker is about $120, available locally, and also has very high consumers ratings.

The Google Trends chart below shows the popularity of searches on this product. It appears to have continued to climb throughout 2014, peaking as the holidays approached, and then waning during the first half of 2015.

Power Pressure Cooker XL appears to be a competent pressure cooker in a crowded field. The merits of the product have been largely overshadowed by slow and expensive shipping costs and delays. The product is now available locally, and I recommend purchasing in this way to avoid shipping delays, and facilitating the return process if needed.

Have you tried the Power Pressure Cooker XL? Drop a comment below and tell me what you think of it.

This review has been updated since its original publication in June 2015.