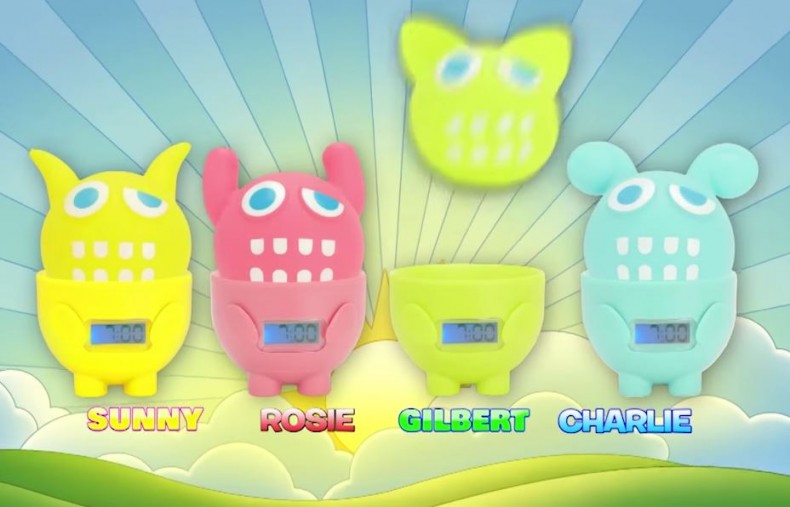 • Only takes batteries
• Expensive
• Setting can be confusing

We found Pop Clocky to work generally as advertised, although a small list of minor cons cannot be ignored. The lack of an AC adapter is the biggest disappointment. You may want to wait until this hits stores to evaluate in person.

Pop Clocky is an alarm clock for kids which includes a character head that pops off when the alarm sounds.

Pop Clocky can be purchased from the official product website for $19.99 + $8.99 shipping for a total cost of $28.98. This includes a glow in the dark upgrade and fun face stickers.

The television spot below has been airing as of July 2015.

Pop Clocky takes on the behemoth task of waking up kids in the morning. It does so by featuring a fun clock that pops its head off and plays a song, which will hopefully wake kids a little gentler than traditional alarm clocks.

Satisfaction with this type of product is subjective, as the sound may be pleasant to some and annoying to others. It wasn’t quite what we expected, sounding more like a 1980’s video game. The sound is not as loud as one may expect, but the seems to be effective enough to wake most kids. We found the clock’s soft plastic to be durable, and the head popped off as advertised.

Although the LED light emits a pleasant glow, the clock itself is a bit small and difficult to read. Be sure to read the instructions for setting the clock, as they seemed to make this far more difficult than necessary.

Perhaps the biggest “con” is that the product does not allow the option to be plugged into the wall. Its battery-only design means that there is a continued cost to replace batteries, or at the very least an additional cost to purchase rechargeables.

We found Pop Clocky to work generally as advertised, although a small list of minor cons cannot be ignored. The lack of an AC adapter is the biggest disappointment. You may want to wait until this hits stores to evaluate in person.

If you’ve used Pop Clocky , please give it a star rating and comment below.