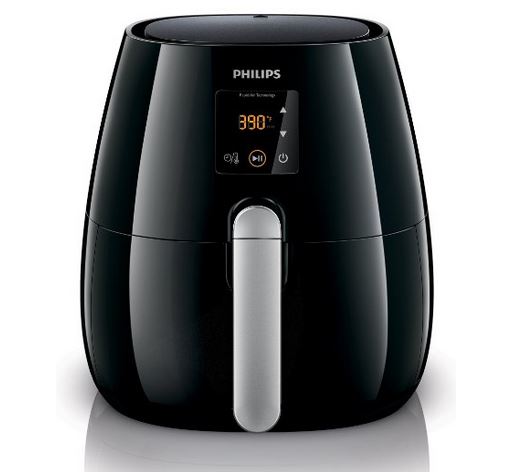 Airfryer is a product which allows you to "fry" foods with only a touch of oil. While it does performs generally as advertised, it also faces a few limitations such as size and price. Because of the high cost, it may pay to shop around.

Although the online consensus tends to give Airfryer about 4 stars, we feel that a 3-star rating is probably a better fit due to the limitations stated above versus what is available by competing brands.

Airfryer by Philips is advertised as a way to create fried foods which are healthier and easy to make.

There are different models of Airfryer available.

Advertised: There is currently an advertised 30-day free trial which is $49.95 plus $24.99 non-refundable shipping.

Website: On the official website lists three different models, all available in either black or white. XL Digital: $399, Digital: $349, Standard: $249.99. See below for a comparison of the three models.

Airfryer is a line of products by Philips, advertised as a way to create fried foods that are healthier and easy to make. This is achieved by their “Rapid Air Technology” which allows food to be prepared with on a tablespoon of oil or less. It is essentially a mini-convection oven.

To operate Airfryer, you turn it on to preheat, which takes 3 minutes. You then remove the drawer/basket and place your desired food into it, and place back in the unit. Set the timer, and wait. The basket for the regular and Digital models is not terribly large, probably only able to hold enough food for about 2 people. Creating a full meal with the Airfryer would take multiple cycles, and is probably not realistic to most people.

Because Airfryer cooks foods at a different speed than other methods, there is something of a learning curve required in making certain dishes. While the product does contain a small booklet of recipes, it would be nice to see this bulked up, as cooking times with this product seem unique vs other cooking methods.

The advertising and the reviews tend to focus on the Airfryer’s ability to make crispy french fries. Indeed, the product does seem well-suited and the results are crispy, more akin to deep frying than oven baking. Most consumers we asked seemed to use store-bought frozen fries, rather than homemade fries. The consensus is that fries made with the Airfryer are crispier than those made in the oven.

While fries turn out crispy, items such as salmon tend to have more of a baked texture, which makes the Airfryer a nice bridge between oven baking and deep frying.

There are three models available: The regular Airfryer is manually operated, the Digital model adds a control panel, and the XL adds a larger capacity.

Marketing for Airfryer makes generous use of the word “healthier.” While it can certainly be said that this method of cooking fries is “healthier” than deep frying, it is probably a stretch to refer to frozen tater tots, french fries, or chicken nuggets as “healthy,” regardless of the method in which they are prepared. It would also not be any healthier than oven-baked foods, which also use only air.

In 2012, advertising for Airfryer was banned in the UK due to its misleading claim that only air was needed, while the fine print noted that oil was required.

XL vs Digital vs Regular

Although the advertising highlights the Airfryer as if it were a single product, there are three models available.

The XL Digital Airfryer, model HD 9240/94, retails for $399. It has a larger capcity of 2.65lbs and a digital touch screen with preset cooking function.

If forced to pick among the three models, we would probably opt for the Digital model, which offers the digital touch screen, but does not include the higher price of the XL.

There are numerous air fryers available, many of them highly rated and less expensive. It may be worth it to peruse some of the listings on Amazon to get a feel for the competition.

For larger cooking demands, you may also want to look at a convection oven, which performs similarly.

Airfryer by Philips is a product which allows you to “fry” foods with only a touch of oil. It performs as advertised, but does face a few limitations such as size and price. Because of the high cost, it may pay to shop around. Although the online consensus tends to give Airfryer about 4 stars, we feel that a 3-star rating is probably a better fit due to the limitations stated above versus what is available by competing brands.

If you’ve used the Philip Airfryer, please give it a star rating and comment below.

OXA Silicone Cooking Gloves Review
Be the first to comment!
Leave a reply »