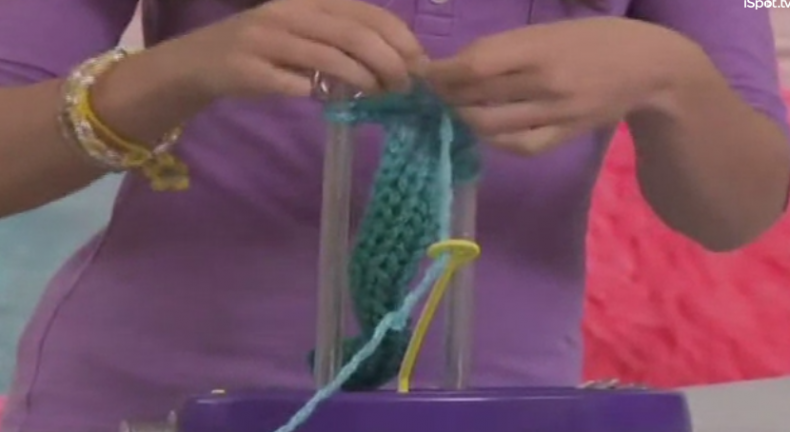 • Learning curve
• May be difficult to achieve desired results for some kids.

Knit’s Cool is a children’ knitting device which has been made simple without requiring needles.

You can find a variety of Knits Cool products online or in retailers such as Toys R Us. The Knitting Studio is typically about $15-$20.

Knit’s Cool is a knitting station by Spin Master which allows kids to knit their own items without the use of a needle. Kids can create a tote purse, scarf, bracelet, headband, phone case, and more.

Rather than using needles, kids “knit” by use of vertical posts, which comes in small, medium, and large sizes. You start by creating a knot which is looped over one post and threaded through a yarn holder. After making several loops, you’ll then move loops from one post to the other, which – when repeated – works the same as traditional knitting.

Admittedly, this technique could require more dexterity than some younger users may possess. Fortunately, there are extremely detailed instructional videos on the product website which should help most consumers overcome any obstacles. Once you get the hang of it, knitting with Knit’s Cool becomes much easier. It is getting over that hump which may prove difficult for the more impatient kids.

The final products produced by Knit’s Cool are attractive and functional. For those hands-on parents, it may be a fun project to share with your child. While the product isn’t made of the highest quality materials, it certainly seems durable enough for its purpose.

There are a number of kitting kits for kids. A perusal of offerings on Amazon yields a number of competing products such as the Cra-Z-Art Knitting Station or the Quick Knit Loom. It would appear that Knit’s Cool is competitively priced compared to the competition.

If you’ve used Knit’s Cool, please give it a star rating and comment below.