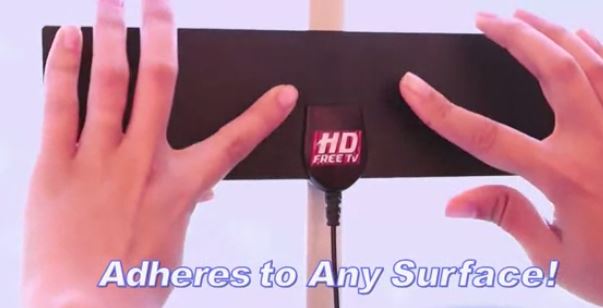 If you don't watch cable-only channels, and your favorite TV stations are those which broadcast in your area, a product such as HD Free TV is a no-brainer. Avid TV fans may also benefit from the improved signal of local channels. Don't expect to completely replace your cable or satellite provider, however, unless you're satisfied with only local broadcast channels.

HD Free TV is a television antenna which allows you to watch over-the-air broadcasts.

The TV commercial below has been airing as of this writing (November 2015).

Today in Tech News Headlines, here’s a way to eliminate your cable bills without losing your favorite channels. The HD Free TV Digital Antenna offers free over-the-air signals from major and even some foreign networks with no monthly fees. That’s right, absolutely free.

A recent federal government mandate has forced all broadcasters to switch to a digital signal over the airways so now you can watch broadcast television in full 1080 HD for free with the HD Free TV Digital Antenna. Simply plug the ANT IN into the back of your TV and scan to instantly start receiving top-rated movies, shows, news, sporting events, and weather from major networks and more.

Basic cable or satellite services can cost you up to $1,000 a year, and require an annual contract. HD Free TV there are no contracts, no monthly fees, and no price hikes to worry about. Just crystal clear picture and sound that’s better than cable and satellite because over-the-air broadcast stations don’t alter their signals like cable and satellite do.

HD Free TV’s thin, low-profile design makes it easy to conceal behind curtains, artwork, furniture, and more. It’s perfect for apartments, a must for RV’s. It’s perfect for dorm rooms and boats. Great for tail-gating parties. Watch the pre-show before the game. You can pay $120 per year for an extra cable box. HD Free TV lets you watch TV in as many room in your home as you want without paying any extra fees or running cable wires.

For a limited time through today’s special TV offer, you can cut the cord with the HD Free TV Digital Antenna for only $10, but wait, order in the next ten minutes and we’ll double your entire order for free. That’s an extra antenna for the RV, boat, kids room, anywhere for free. That’s two HD Free TV Digital Antennas, a $40 value for only $10. This offer will never be available in stores so call or click now. To order, call 1-800-658-9735 or go online to HDfreeTB.com. Order now.

HD Free TV is advertised as a way to lower you cable bill while receiving crisp uncompressed video signals. Its thin and attractive design complements a multi-directional function that is easy to install.

Consumers familiar with “free HD TV” commercials may have seen Clear TV, Free TV Key, or similar products which are large on promises, but don’t often highlight the fact that devices such as this are simply regular television antennas, no different in function than an old pair of rabbit ears.


On the plus side, HD Free TV does in fact provide a superior signal over cable because over-the-air signals are not compressed in the manner that cable signals are. Conversely, while your picture may be superior, a switch to HD Free TV may thin out your channel lineup, perhaps considerably. This is because HD Free TV only receives those channels which broadcast over the air in your area, typically numbering only a small handful. You can visit Antenna Web to find out which channels are broadcast in your area.

Avid TV fans may also want to consider a product such as HD Free TV, as those channels broadcast in your area will be crisp due to the uncompressed signal. Watching something such as a major sporting event could benefit from the slightly improved picture.

The first highly-visible As Seen on TV product to promote an over-the-air antenna would be Clear TV, which has advertised non-stop since 2013. A follow-up product called Free TV Key was added to their product line in 2015. You can also find a number of television antennas on Amazon of various sizes, shapes, and prices.

If you don’t watch cable-only channels, and your favorite TV stations are those which broadcast in your area, a product such as HD Free TV is a no-brainer. Avid TV fans may also benefit from the improved signal of local channels. Don’t expect to completely replace your cable or satellite provider, however, unless you’re satisfied with only local broadcast channels.

If you’ve used HD Free TV, please give it a star rating and comment below.

This review has been updated since its original publication in November 2015.

MyPurMist Review: Does it Work?
comments
Leave a reply »