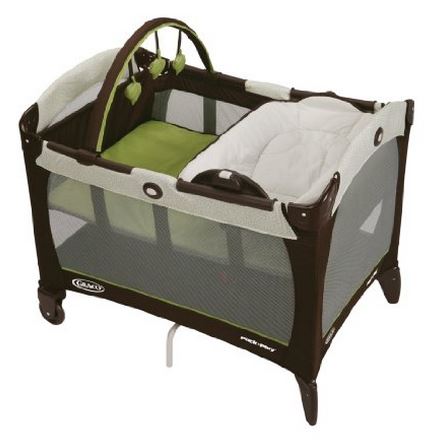 • Height of changing pad is seen as too low by some consumers.
• Fabric is spot-clean only
• Changing table weight limit is 15lbs
• Detatching bassinet is problematic for some

Graco Pack N Play Playards with Reversible Napper and Changer is a new addition to Graco’s Pack N Play line, which combines playard, bassinet, napper, and changer into one product.

The Napper and Changer version of the Pack N Play Playards typically runs about $100. We have seen them for sale online for less, so it may pay to shop around.

The TV commercial below has been airing as of July 2015.

The days of purchasing a playpen, bassinet, and changer separately are a thing of the past for customers who pick up Graco’s Pack N Play Playards with Reversible Napper and Changer. Although the line may sport the longest product name we’ve ever encountered, it also packs a punch in features and consumer satisfaction. Graco appears to have taken consumer feedback for their first line of Pack N Play Playards and implemented the all-in-one design that has received overall high ratings.

On Amazon, one of these product boasts an impressive 4.5-star rating with over 600 reviews. Other models are similarly high rated.

We found this product to be well-constructed and successfully combines three vital pieces into one unit. The ability to use it from newborn to toddler saves the hassle of purchasing separate products over time.

There are some limitations, such as the ability to only spot-clean surfaces. Some customers have said that a few spit-ups quickly lessened the aesthetic value of the product. The changing station, while a welcomed design addition, requires bending or kneeling to the point of discomfort for some people. The size and mobility of the product appears to be debated, with some stating that the size is just right and others stating that it is difficult to move or setup. An in-store evaluation will allow you to decide for yourself.

Although it isn’t a perfect product, we still feel the overwhelming majority of consumers will be more than happy with Graco’s versatile offering.

While there are untold numbers of playpens, nappers, and changers, the way in which this product combines all three appears to be unique.

If you’ve used Graco Pack N Play Playards, please give it a star rating and comment below.