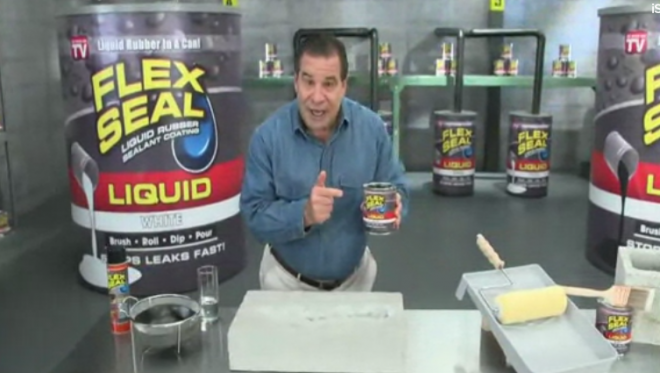 • If not used in a short amount of time, some may harden in the bottom of the can or around edges.
• Separate shipping and processing costs totaling nearly $20
• "Large" can is only 16 ounces

Flex Seal Liquid gets the job done, but the exorbitant processing and shipping fees and the small size in the can will lead many customers to look elsewhere. When it becomes available in stores, it will likely be more competitively priced.

It is currently only available from the official product website, flexsealliquid.com, which was first registered in September 2015.

Hi, Phil Swift here for Flex Seal, the easy way to coat, seal, and stop leaks fast. And now there’s Flex Seal Liquid, the super thick rubber that you can pour right into cracks, to stop water dead in its tracks. You could brush or roll large areas for water tight seal. Even dip all your tools for a tough no-slip grip.

Flex Seal starts out as a thick liquid and turns into a super strong flexible rubber. Dip PVC pipes or downspouts to create a watertight seal that lasts for years. This rubberized coating prevents rust and corrosion. In extreme heat or cold, Flex Seal Liqud keeps its hold.

Flex Seal Liquid is safe around plants and animals, so we used it to seal this fish pond. Now any project big or small, with Flex Seal you can do ’em all.

After a day on the water, flying through alligator-infested swamps, Flex Seal’s water-tight barrier takes a beating, stays strong and flexible, and the inside is completely dry. Yahoo!

The past several years have seen a constant stream of Flex Seal-branded products advertised on television, all pitched by Phil Swift. The latest offering, which first appeared at the end of 2015, is Flex Seal Liquid. Unlike previous Flex Seal products – which were available in spray cans – Flex Seal Liquid comes in a can and is utilized in the same manner as paint.

The product can be applied in a variety of ways: rolling, dipping, pouring, etc. The commercial does accurately show effective uses for Flex Seal Liquid. PVC pipe dipped in the can, for example, will harden to form a perfect waterproof bond.

It takes about an hour for the product to dry.


As far as working as advertised, we will give Flex Seal Liquid high marks. It seals to form a nice rubber coating, and only a thin layer is often sufficient to waterproof or stop leaks. The advertising continues the Flex Seal tradition of showing Phil Swift in a vehicle made watertight by Flex Seal Liquid. It has proven to be an effective visual in past advertising spots.

Although Mr. Swift stands next to a massive 6-foot tall display of Flex Seal Liquid, the “large” can is not very large when viewed in person. It is in fact only a 16 ounce can, which is suitable for small jobs around the house, but certainly not enough to cover an entire rooftop as shown in the advertising.

Liquid rubber products such as Flex Seal Liquid have existed for years. A popular product on Amazon by Rust-Oleum is called LeakSeal. It looks and performs virtually the same as Flex Seal Liquid. As of this writing it holds a 4.1 star rating at Amazon and is priced at around $30. That can holds 30 ounces, versus only 16 ounces for Flex Seal Liquid.

Flex Seal Liquid gets the job done, but the exorbitant processing and shipping fees and the small size in the can will lead many customers to look elsewhere. When it becomes available in stores, it will likely be more competitively priced.

If you’ve used Flex Seal Liquid, please give it a star rating and comment below.

5 Second Fix Review: Glue Alternative?
Be the first to comment!
Leave a reply »