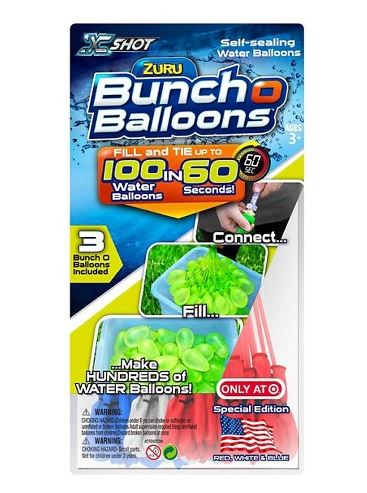 Bunch O Balloons is the original fast-fill, self-tying balloon product. It is better-constructed than the knockoffs, which are plagued by leaks and incomplete filling. It is widely available and competitively priced.

Bunch O Balloons is the original fast-filling, self-tying water balloon toy which can fill over 100 balloons in minutes.

Bunch o Balloons is available at the official product website for about $19, which includes shipping.

The product is widely available at retailers such as Bed Bath and Beyond, Walmart, and CVS for about $10.

The TV commercial below was posted to YouTube in April 2015.

Bunch O Balloons first gained notoriety after a highly-successful Kickstarter campaign in 2014. Although it took some time for it to be properly marketed (a knockoff actually hit national airwaves first), it finally appears to have hit its stride in mid-2015.

The concept is simple: 35 balloons are attached to tubes, which are fed by a single larger tube that connects to a hose or spigot. When water is turned on, all of the balloons fill simultaneously. When they reach the desired size, a twist of the wrist will allow them to fall off – and they are automatically tied as they disconnect from the unit.


Bunch O Balloons works mostly as advertised, and it is clearly superior than knockoffs which are cheaply made and suffer from a variety of durability issues. That’s not to say that Bunch O Balloons is perfect.

It is not technically refillable (see below), and there have been occasional consumer complaints of leakage or incomplete filling. When balloons are not filled enough, they also don’t pop as expected. In the vast majority of cases, including our own tests, however, Bunch O Balloons delivers the goods. It boasts a 4-star rating with over 250 reviews on Amazon.

The first question that most consumers ask when they see this product is if it is refillable. The answer is no… and yes.

Officially, Bunch O Balloons is a one-time use product. There are, however, third party refill kits and even DIY videos on YouTube which allow the product to be refilled. It should be pointed out, however, that the time it takes to reattach 100 balloons may defeat the product’s fast-fill design. Of course refilling for use at a later date may be desirable to some people.

As the price of Bunch O Balloons has dropped, a refill kit makes less sense, even if you were to save a few dollars.

Several fast-fill balloon products hit the market after the Bunch O Balloons Kickstarter campaign made headlines. The most notable is Balloon Bonanza by Telebrands, which is currently being sued by the makers of Bunch O Balloons.

Read our comparison of Bunch O Balloons versus other fast-fill water balloon products.

Below is a thorough comparison of Bunch O Balloons and the 2017 Telebrands fast-fill balloons called Easy Einstein Balloons.

Bunch O Balloons is the original fast-fill, self-tying balloon product. It is better-constructed than the knockoffs, which are plagued by leaks and incomplete filling. It is widely available and competitively priced.

If you’ve used Bunch O Balloons, please give it a star rating and comment below.