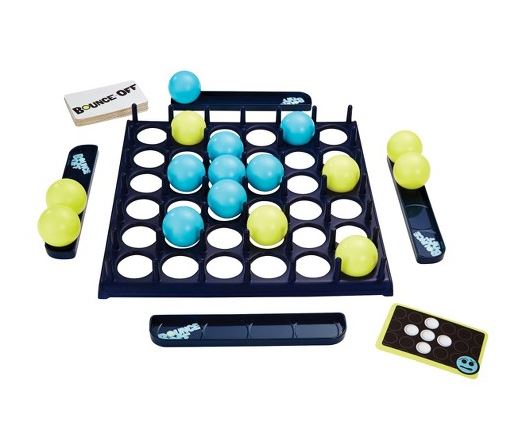 • Mastering the game can require skill that may be beyond some children.
• Limited number of available patterns

Bounce Off is a simple game that provides enough of a challenge to keep it interesting, without frustration. We feel the vast majority of consumers will find the game to be a fun and worthwhile investment.

Bounce Off is a turn-based board game in which ping pong balls are bounced onto a game grid to match a pre-determined pattern.

You can find Bounce-Off at retailers such as Target, Toys R Us, Walmart, and Amazon for about $12-$15.

The TV commercial below is currently embedded on the official Bounce Off website.

Mattel brings back turn-based board game fun with Bounce Off, a sort of cross between beer pong and Connect Four. The game is simple: Draw a card, and try to match the pattern by bouncing your ball onto the board. The first team to complete a pattern wins the card. The first team to win three cards wins the game. The board is a 6×6 grid with pegs that hold the balls in place. Each player (or team) gets 8 balls to try to create a pattern.

We found the game to be a fun diversion away from electronics, and provided the experience of an old-school board game. While the concept may be simplistic, there is still a certain appeal that the challenge of creating patterns provides.

Playing is easy, but mastering the game it is not quite as simple.

It appears that the game was heavily advertised in late 2014 with a marketing campaign that ended around April 2015. Despite the end of that campaign, Bounce Off is still a hot seller on Amazon.

Note that you may run across a game called Bounce Off Party from online vendors. That game is designed for four players, but as of June 2015 it does not appear on the Mattel website, and does not seem to be currently in production.

Although Bounce Off is said to be for 2-4 players, a 4-player match would have to be two teams, as there are only 2 colors of balls.

Bounce Off is a simple game that provides enough of a challenge to keep it interesting, without frustration. We feel the vast majority of consumers will find the game to be a fun and worthwhile investment.

If you’ve used Bounce Off, please give it a star rating and comment below.