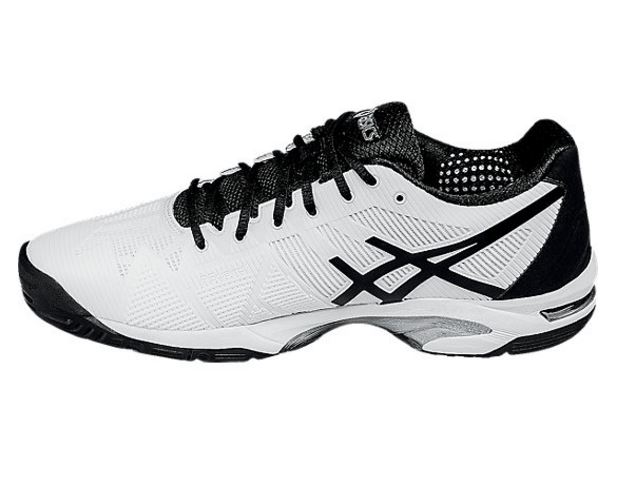 • May feel heavier than the SS2.
• Breathability
• Ankle area cut higher, may not feel as comfortable as previous incarnations

The Gel-Solution Speed 3 has received generally positive reviews from loyal users around the internet. Initial reviews seem to indicate that - although it is a fine offering - it may not be as popular as its predecessor.

Gel-Solution Speed 3 is a high performance tennis shoe by Asics for men or women. It features gel cushioning systems to reduce shock and impact. Said to fit like a glove, this incarnation offers a few enhancements over its popular predecessor, the Speed 2.

The third offering in the Gel-Solution Speed series, the Speed 3 has some rather big shoes to fill in trying to live up to the popularity of the Speed 2. With Speed 3, we have many of the same features users came to love with Speed 2, including a low-profile sole. Improved traction is one of the few areas Speed 3 was able to actually make headway over its predecessor.

A number of websites have evaluated the Gel Solution Speed 3 shoes. Below is a summary of some of the notable opinions regarding both women and men versions:

The comfort and stability are still top-notch. The Asics Solution Speed 3 is remarkably plush, especially for being so light. While not as padded as some shoes, I found the cushioning to be an ideal compromise between soft and responsive. The upper is a little more supportive than the SS2, without compromising the superb flexibility.

All-in-all though, this is a great update on an already terrific shoe.

The Asics Gel Solution Speed 3 shoe is one of the better shoes we have tested to date, personally one of my top 5 shoes.

Our testers found an even more locked-in, supportive and stable fit than they got from the previous version. However, they also noticed a slightly more narrow fit and maybe a tad less breathability. All in all, though, we are confident that fans of previous versions will love the Gel Solution Speed 3s

I’ve been wearing these for a couple months now – the fit is excellent, nice light weight. Only caveat is that you trade of support for the lighter weight.

This is a television commercial for Gel Solution Speed 3s which began airing in mid-2016.

Asics dominates the gel tennis shoe category, and you may want to take a look at their popular Gel-Resolution 6 line, which is highly rated.

The Gel-Solution Speed 3 has received generally positive reviews from loyal users around the internet. Initial reviews seem to indicate that – although it is a fine offering – it may not be as popular as its predecessor.