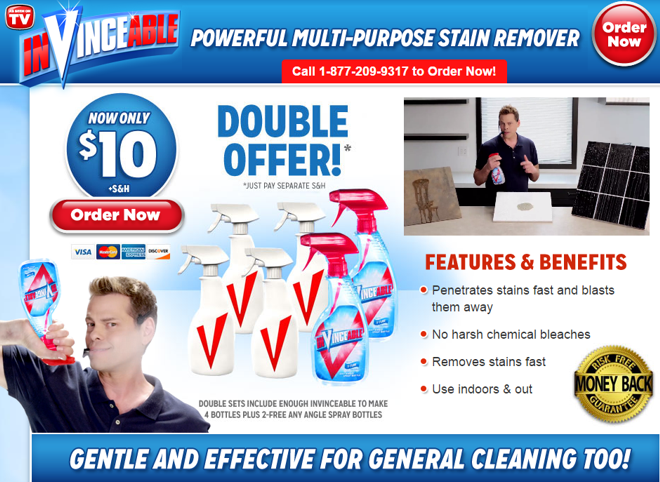 Review of InVinceable, an As Seen on TV all-in-one cleaner. Does it actually work? Consumers speak out.

This “powerful multi-purpose stain remover” is pitched by – and named after – the ShamWow pitchman known as Vince Offer (whose real name is Offer Schlomi). InVinceable was originally marketed in September 2013, and was seen at the time as a comeback of sorts for the pitchman, who had found himself in legal trouble not long after his ShamWow fame. Vince claims to have invented this product himself. As of May 2015, InVinceable has been advertising regularly on fringe cable channels.

When ordering from the product website, InVinceable costs $10 plus $6.95 shipping. Keep in mind that it is only sold in “double sets” so you will be paying shipping x2, for a total order price of $23.90, which is enough to make 4 bottles of cleaner. There is a 30-day money back guarantee, but that does not include shipping. If you order from the product website, your wait time is expected to be 2 to 3 weeks.

You can find InVinceable in stores such as Bed Bath and Beyond for about $10. Although the website claims that this offer is not in stores, they are referring to the offer, not the product itself.

The commercial below has been airing as of May 2015.

Miracle cleaners have been a mainstay of As Seen on TV advertisements, perhaps because they are inexpensive to produce, and the results are so subjective. In the case of InVinceable, there are scenes that seem impossible to duplicate, such as when Vince sprays stains which completely disappear before our eyes – an effect which has not been duplicated by myself and other reviewers.

InVinceable is not sold as a liquid, but as a pouch containing a dissolvable powder, which is to be mixed with water. Originally it was marketed as a tablet. The main ingredient is said to be sodium percabonate. You get four pouches, which can deliver 8 uses if you only use half a pouch at a time (which is recommended for general cleaning).

I did find that in some circumstances, InVinceable worked quite well, such as cleaning dirty stucco or painted walls. In one section of wall with significant dirt, a few sprays of InVinceable and only gentle wiping were required to restore it back to its original color.

In my evaluation of the product, I noted the following caveats:

Watch my full review of InVinceable below.

There are numerous all-purpose cleaners on the market. Those by Green Works, 409, and Simple Green are highly rated and have extensive customer track records. My Cleaning Secret is another As Seen on TV cleaner we have encountered in recent months.

InVinceable all-purpose cleaner has been advertised on and off since late 2013. It marked the return of pitchman Vince Offer to the airwaves after a highly-publicized legal incident. The product, however, has been met with mixed reviews, which I think is because results seem to vary depending on how and where it is used. It seems that the product is best suited to carpet stains and cleaning walls. The design of the bottle, however, seems to have impressed many consumers, although mine tended to leak while upside down.

If you’ve used InVinceable, please give it a star rating above and a comment below.

Furniture Feet Reviews: Do They Work?