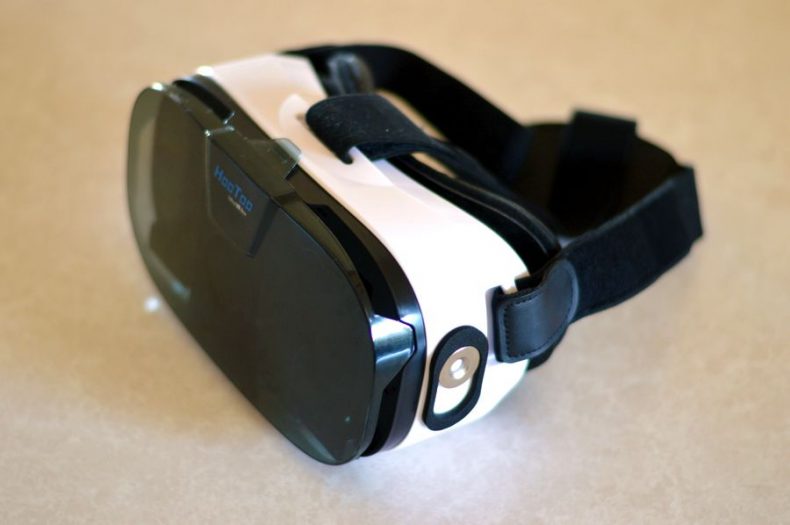 HooToo's VR headset is a fine entry in the low-end virtual reality field. It can't compete with medium to high end headsets, such as Oculus Rift or even the Samsung Gear VR, but it is among the best in its class as a low-end, entry-level VR headset. If you want to get your feet wet in the VR revolution, but don't want to spend hundreds - nor do you want to scrape the bottom with Google Cardboard - the HooToo VR Headset may be a good place to begin.

The HooToo VR Headset is a virtual reality device which allows you to use your smartphone to experience 360 degree movies, photos, and apps. It is based on the Google Cardboard platform, which gives you have access to thousands of videos and apps, with the inventory growing daily. It is currently a best seller on Amazon.

The HooToo VR headset is among the top sellers in its class on Amazon, and that is where you’ll find the majority of consumer reviews for this particular product. While reading those reviews, however, you’ll need to dig deep in order to find a few balanced opinions. Below is a sample of one of the more balanced reviews on Amazon:

I noticed that everything was deemed accurate within the description. The headset was constructed well and fit nicely upon my head. That being said, while doing a good job of keeping the headset attached to my face, I’ve noticed that the straps make it so that the headset is almost too tight despite extending the strap to it’s maximum length. On more than one occasion I’ve felt the lenses actually touch my eyes…Also you can’t adjust the lenses while wearing the headset, which makes the task of fine tuning the lenses a rather monotonous affair. And if you wear glasses, then forget about wearing this headset. As I stated earlier, the straps see to it that there is little to no space between the lenses and your eyes.

Perhaps the biggest challenge you’ll encounter while reading Amazon reviews for this product (and many others) is that many reviewers received the product for free or at a reduced rate in exchange for their “honest review.” It’s our opinion that this arrangement is not the ideal path to a truly objective review.

So for this review, we plunked down $25 in order to give you a truly balanced look at this product.

The item arrived nicely packaged and in a professional box. The contents included the VR headset, an instruction booklet, a shade cover, and a cloth. The headset itself feels well-constructed and has so far held up to extensive use (20+ hours as of this writing). We have tested it using a variety of motions, and the phone never slipped out, or even slipped out of place. Our evaluation is based on four testers, two male and two female.

The 102-degree field of view is certainly not what you would expect with a higher end system, although we found it to be respectable for its class and price range. Unlike some models, which only work with a small number of smartphones, the HooToo can handle any phone from 4.7 to 6 inches. We tested it with an iPhone 6s Plus and a Galaxy S6 Edge, and both performed well. There are two adjustable holders which you can slide back and forth in order to accommodate your phone, as shown in the image below. 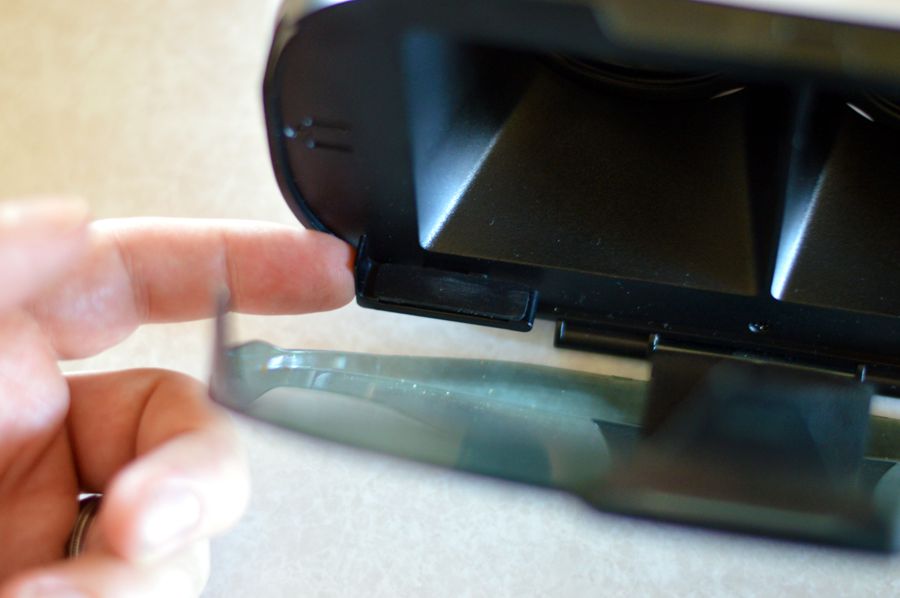 These holders allow you to fit a variety of phones into the headset.

There are two ways to adjust the lenses. One way is to slide the two levers at the bottom (shown above). This moves the lenses from left to right. The other way is to screw or unscrew the lenses themselves, but unfortunately this can’t be done while wearing the headset. This makes adjusting the lenses more of a trial and error procedure. It seems that those with no vision problems require the lenses to be almost completely unscrewed, which puts them very close to the eyes. This close proximity to the eyes makes wearing glasses less feasible (our one bespectacled tester found it impossible to use with glasses). We found the lenses to be acceptable, but certainly not high quality. The edges of the screen do not appear as clearly focused as the center, and there are some areas where the picture slightly ripples. Had we paid hundreds, we would expect higher quality lenses. For low-end VR, these are sufficient.

The magnetic trigger is both a pro and a con. Some headsets lack this feature, meaning an external control is needed, so the inclusion of this feature is certainly a plus. There are times, however, when the trigger doesn’t seem to work, or it takes multiple tries for it to register. Operating the trigger feels much like using an old ViewMaster, in which you slide it down, and it slides back up on its own. 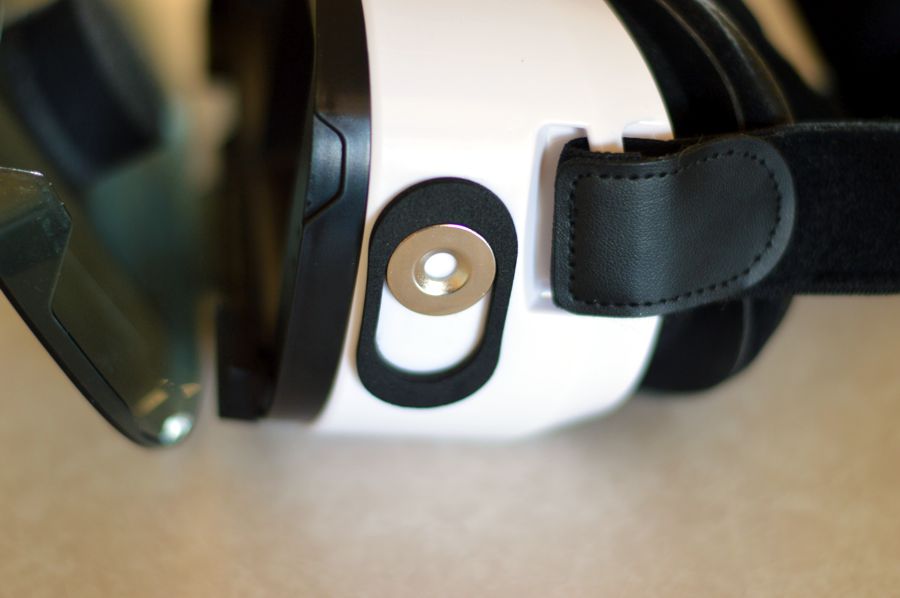 Perhaps the biggest “con” with the product is the comfort of the headset. Our testers who were smaller in stature did not report any issues with comfort, but male testers (both over 5′ 10″) found that it dug into their foreheads, even with the strap fully extended. The only way those testers could make it comfortable enough to use was to slide it down so that the padding rested on the eyebrows. At that level, however, the nose section begins to pinch the nostrils. It’s difficult for those with larger heads to achieve a comfortable fit. One tester opted to hold the headset with his hands, rather than deal with the discomfort of using it strapped to his head.


There is a significant problem that is an issue with virtual reality in general: motion sickness. All of our testers at some point felt some degree of motion sickness after using this headset. This varied wildly among different individuals, and was affected by the types of apps or videos they watched. It has been suggested that popping a Dramamine before a long VR session may actually reduce or eliminate motion sickness.

For those of you who are completely new to the VR world, we’ll give you a little heads-up on how it all works. Apps can be downloaded from iOS or Android app stores, and are usually pretty self-explanatory (usually search with the terms “VR” or “360” and you’ll find plenty of options). On YouTube, you can view any videos with this headset. 2D videos are presented as if projected onto a movie theater screen, while 360 videos are in virtual reality. Below are screenshots which show how to view 360 and 2D videos within VR headsets. It’s best to search for your desired video, hit the Cardboard icon, then pop it into the headset. You can use the trigger to pause or replay the video.

Note that in order for YouTube to work with you VR device, videos must be viewed from within the YouTube app, and not from the mobile site. 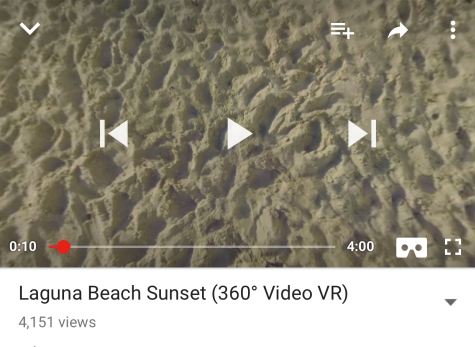 A 360 “VR” video on YouTube will give you the Cardboard option at the bottom right. 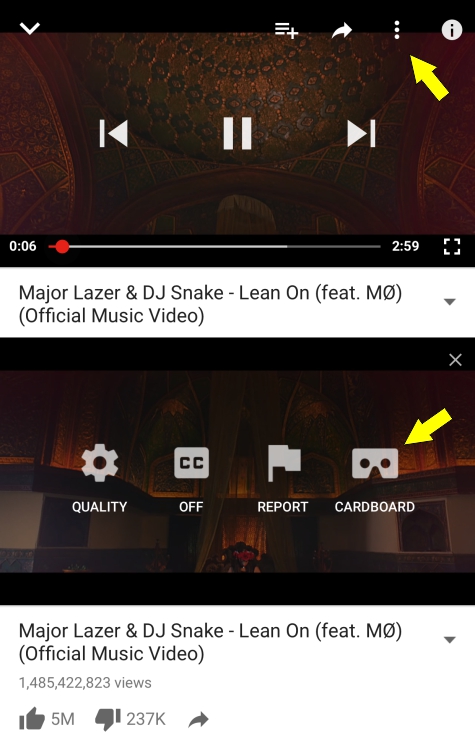 To view a 2D video, click the three buttons at the top right, then click the Cardboard icon.

The VR revolution is happening now and vendors are jumping on the bandwagon, each offering their own headsets. This HooToo device is in the Google Cardboard class of headsets which use a smartphone. A cursory search of VR Headsets on Amazon yields an overwhelming number of options. This particular model is currently listed as a Best Seller.

If you want to move up to a higher end smartphone-based headset, the Samsung Gear VR should be the first place to look. This $90 unit is the top of the line for this class of VR headsets, but it only works with a small number of Android devices.

Moving up higher on the list you’ll find the Oculus Rift and the HTC Vive, which require a powerful computer, but offer a stunning VR experience. Sony will be releasing a headset for the PS4 later in 2016 which is expected to compete with Oculus and HTC in the high end headset market.

HooToo’s VR headset is a fine entry in the low-end virtual reality field. It can’t compete with medium to high end headsets, such as Oculus Rift or the Samsung Gear VR, but it is among the best in its class as a low-end, entry-level VR headset. If you want to get your feet wet in the VR revolution, but don’t want to spend hundreds – nor do you want to scrape the bottom with Google Cardboard – the HooToo VR Headset may be a good place to begin.