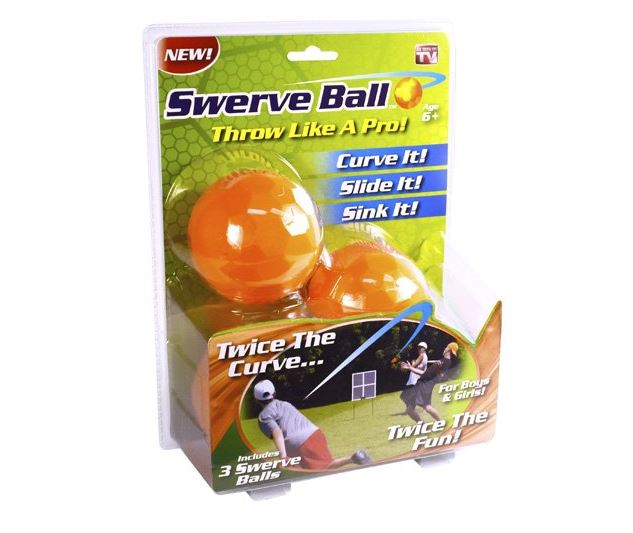 • Not durable, can dent easily.

Swerve Ball is a knockoff of Blitzball, and suffers from durability issues which are quite stark. It does handle well when thrown, but can be easily ruined if you plan to use a bat to hit it.

Swerve Ball is a special ball which allows anyone to easily throw like professional baseball pitchers. Check out our Swerve Ball review here.

From the official website, Swerve Ball costs $14.99 + $5.99 P&H. You can find it in stores such as Walmart or Target for about $10. The online offer includes a “sweet spot bat sleeve” that is not sold in stores.

The TV commercial below has been airing as of this May 2016 writing.

Swerve Ball has been seen in a 2016 advertising push which shows extreme curve balls being thrown using this specially-designed ball. You can throw curves, sliders, and sinkers like the pros due to its special design.

If the product looks familiar, you have probably seen a similar products called Blitzball, which seems to have “inspired” Swerve Ball (see below).


Throwing Swerve Ball generally works as advertised. You can throw impressive curves with little to no skill, although you can improve your throws with some practice. In that regard, Swerve Ball delivers on its advertising promise.

Where the product falters, however, is with its durability. While throwing the ball is not problematic, if you plan to hit the ball, there is a high chance it will be dented and rendered unusable. There are a number of readers on Amazon (where it has a 2-star rating) and YouTube videos which reiterate this complaint, even when using the bat sleeve included with the product. Using a light plastic bat is your best chance to avoid denting Swerve Ball.

If you want to practice your pitching, Swerve Ball may fit the bill. Playing in a game that requires it to be hit by a bat will likely be beyond the durability constraints of Swerve Ball.

As noted above, Swerve Ball is generally considered to be a knockoff of Blitzball, which has been around since at least the 1990s. That product does not suffer from the durability problems that we feel will eventually sink the Swerve Ball.

Swerve Ball is a knockoff of Blitzball, and suffers from durability issues which are quite stark. It does handle well when thrown, but can be easily ruined if you plan to use a bat to hit it.

Have you tried Swerve Ball? Please give it a star rating and comment below.