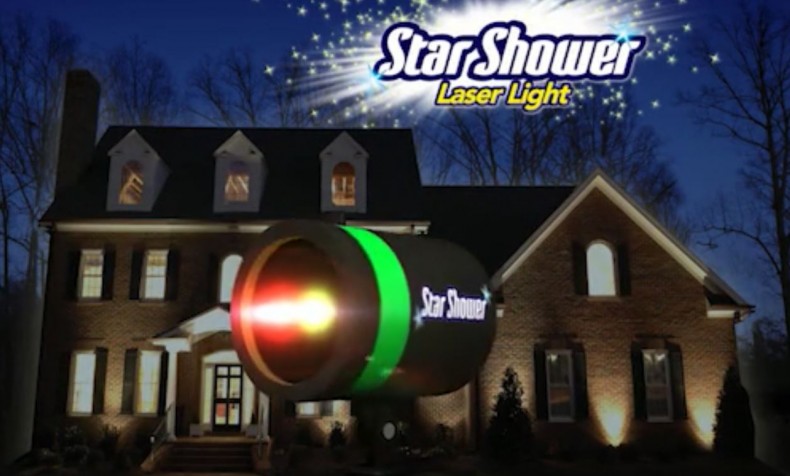 Star Shower Laser Light is product introduced in 2015 which allows a laser light show to be displayed on your home or landscape. Our initial tests of the product were positive, and the display was as expected. There is a rather large minority of consumers who have expressed concern about the product's durability and long-term viability.

Star Shower Laser Light is a decorative light show which can light up the outside of a home as easily as shining a spotlight.

Star Shower is available in stores for about $30. The website which used to sell Star Shower now promotes the follow-up called Star Shower Motion, which you can see reviewed here or in the embedded video below.

This product is brought to you by As Seen on TV heavyweight Telebrands, which has delivered some of the most visible products to the TV airwaves. Star Shower Laser Light was released in 2015, with its website first appearing in January of that year, while its Facebook and Twitter pages were created in March and April respectively.

Although Star Shower Laser Light is advertised as something that can be used all year long, its Christmas-themed red and green options tend to limit its use to the Winter holidays. One would hope that a red-white-blue option may become available for use in on such occasions as Memorial Day, July 4th, Veterans Day, and Labor Day. Note: This did occur with the lesser known “Star Shower Patriot” that appeared months later.


We had an opportunity to try out Star Shower Laser Light and the results were surprisingly impressive. Although it might take the full 6 pack to achieve some of the dramatic results shown in the advertising, a single unit does seem ample for a room or small area. Some of our readers have expressed concerns about the safety of laser lights, which is not really addressed on the product website. We have reached out to the company for clarification and will update this page if and when they respond.

It appears that Star Shower Laser Lights were briefly test marketed before being highlighted in infomercials and then rolling out to retailers.

Be sure to read dozens of comments on Accroya.com its corresponding LockerDome page. There appear to be a number of consumers who have expressed concerns about the product’s durability. Complaints vary from a single color not working to the unit stopping functioning after a short period of time.

We recommend purchasing locally so that if you encounter such problems, the returns process would be more easily handled.

As noted above, Star Shower Motion is the follow-up that has been highly touted in 2016. That product’s release has led many retailers to drop the price of the original Star Shower Laser Light from $40 down to about $30.

There are a number of outdoor laser light products available, averaging around $60-$120.

Star Shower Laser Light is product introduced in 2015 which allows a laser light show to be displayed on your home or landscape. Our initial tests of the product were positive, and the display was as expected. There is a rather large minority of consumers who have expressed concern about the product’s durability and long-term viability.

In 2016 this product was largely replaced by Star Shower Motion.

If have any information on Star Shower Laser Light, including ordering or using the product, please give it a star rating and comment below.