Micro Touch Tough Blade Reviews: Does it Make the Cut? 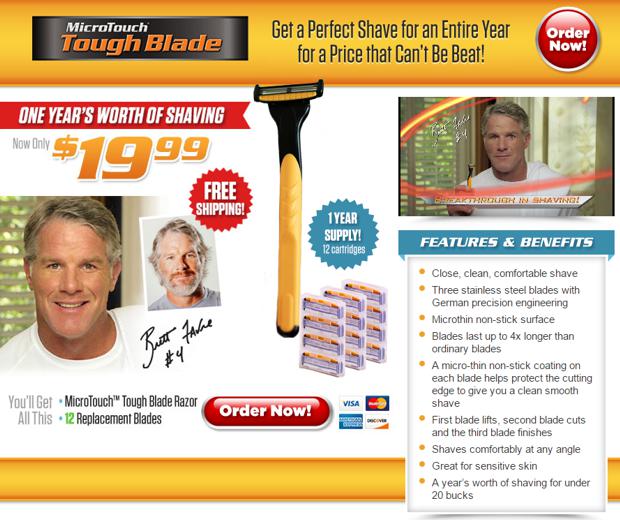 The Micro Touch Tough Blade is an As Seen on TV razor which claims to provide a year of shaving supplies for under $20. Advertising for the Tough Blade features ex-NFL star Brett Favre, who attempts to convince men to try the product. In our tests, we felt that it performed on par with an average to below average razor, and is nowhere in the league of the Gillette Mach3.

Reviews of MicroTouch Tough Blade, an As Seen on TV razor for men pitched by Brett Favre.

MicroTouch is an As Seen on TV brand which has advertised a number of hair removal products in recent years. These include the Micro Touch Switchblade, One Razor, an Micro Touch Max. Brett Favre has also been seen in advertisements for other Micro Touch products and Copper Fit. Now with the Tough Blade, we are offered a razor which is said to provide a clean shave for under $20 a year.

Tough Blade is marketed by Idea Village, which is one of the larger As Seen on TV marketing firms in existence.

The official product website is toughblade.com, as seen below in screenshots from 2015 and 2016. Notice that some of the Features and Benefits from 2015 were removed in 2016, such as “Blades last up to 4x longer than ordinary blades.”

Screen capture of the Tough Blade website from April 2015. 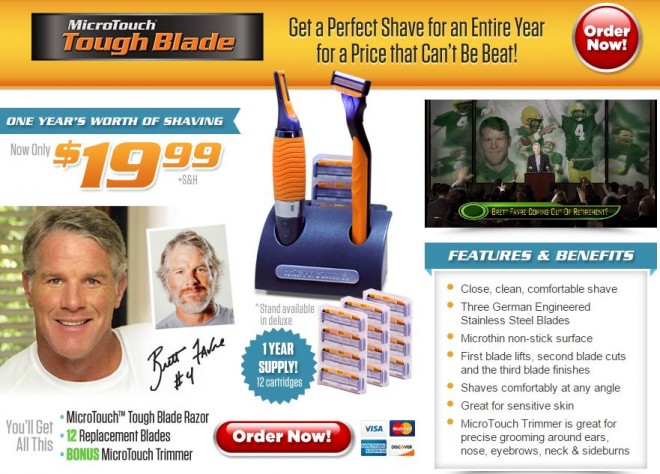 Tough Blade costs $19.99 plus $7.99 shipping (notice in the screenshot above that shipping was free in 2015). This includes the razor and 12 cartridges, which is said to be a 1 year supply. You are also given the opportunity to upgrade to a “deluxe” Tough Blade, which includes a Micro Touch Max and storage stand, for an additional $9.99. There is a 30-day money back guarantee, minus the $7.99 shipping.

You can find Tough Blade in stores such as Rite Aid or Walmart for about $20.

Below is a television commercial for Tough Blade which ran throughout most of 2015.

Transcript of the commercial above:

Ever wonder why big razor companies keep raising their prices? Because they know if you want a great shave, there’s nothing you can do about it until now.

“Hi, I’m Brett Favre, and I found a way to get a perfect shave for an entire year for under 20 bucks. Check it out.”

Introducing the all-new MicroTouch Tough Blade, the German-engineered razor guaranteed to give you the close, clean, comfortable shave you want at a price that can’t be beat.

“With other razor blades, I was spending 20, 30 bucks a month but with Tough Blade I spent $20 for the entire year, and I get a great clean smooth shave.”

“You cannot lose. You get a close shave and you save money.”

Tough Blade combines three perfectly angled German stainless steel blades with a micro-thin non-stick surface. The first blade lifts, the second cuts, and the third finishes for a shave that’s smooth and feels good on even the most sensitive skin.

“I shave up, I shave down, I shave across. Every angle I put the blade was a nice shave.”

“I’m not only shaving my head, I’m shaving a big head, and I’m also shaving my face. So it’s important that, you know, my razor responds like it’s supposed to.”

“Honestly, this blade was better than the 5-6 blade razors that I’ve been using. Tough Blade is a godsend.”

“I love my Tough Blade.”

Look, you can spend 20 bucks for just 4 replacement blades, or you can get a great shave for the entire year for just $19.99 with the Tough Blade. As a free bonus, you’ll also get our Micro Touch trimmer for precise grooming around ears, nose, eyebrows, neck and sideburns.

Call now to get your Tough Blade complete with enough cartridges for a year’s worth of smooth shaving, plus the Micro Touch trimmer, all for only $19.99.

“Hey, I’m Brett Favre. I got my groom back with Micro Touch. Now you can, too.”

Mens’ razors are a competitive market, with some of the heavyweights such as Gillette shelling out heavy advertising dollars annually. With Micro Touch products, however, there is an As Seen on TV feel to the the way they are advertised and in the layout of their many websites. The appearance of Brett Favre in advertisements is certainly a boon for the marketers of Tough Blade.

Reviews for Tough Blade vary wildly. Glowing five star reviews are often followed by blistering one star condemnations. Concerns range from shipping delays to durability of the razor itself.


In our tests of the product, we found Tough Blade to fall between a high end disposable or a low end cartridge system. We did not find the cartridges to provide a full month of effective shaving, and it was certainly not in the same league as the Mach3. Some of our readers have left comments below claiming that the razors seemed dull.

It should be pointed out that it is possible to make almost any razor last a year, as proven by Clark Howard. Thus, the claims that this product could last a year are not completely unfounded.

Note that as of December 2015, nearly 700 users here at Epic.Reviews have given their votes and rank the Tough Blade at 2.4 stars.

Micro Touch has heavily advertised another razor, the One Razor, featuring Rick Harrison of Pawn Stars as its celebrity endorsement. While Tough Blade is a standard cartridge razor, One Blade is an old school safety razor which requires something of a learning curve to those unaware of how they work.

The shaving section of department stores and drug stores are lined with shaving options, from throwaway disposables to high-end multi-blade systems.

There is no shortage of alternate products which can be readily found at most stores.

The Micro Touch Tough Blade is an As Seen on TV razor which claims to provide a year of shaving supplies for under $20. Advertising for the Tough Blade features ex-NFL star Brett Favre, who attempts to convince men to try the product. In our tests, we felt that it performed on par with an average to below average razor, and is nowhere in the league of the Gillette Mach3.

If you’ve used Micro Touch Tough Blade, please give it a star rating above, and tell us about it in the comments below.

This review has been updated since its original publication in April 2015.