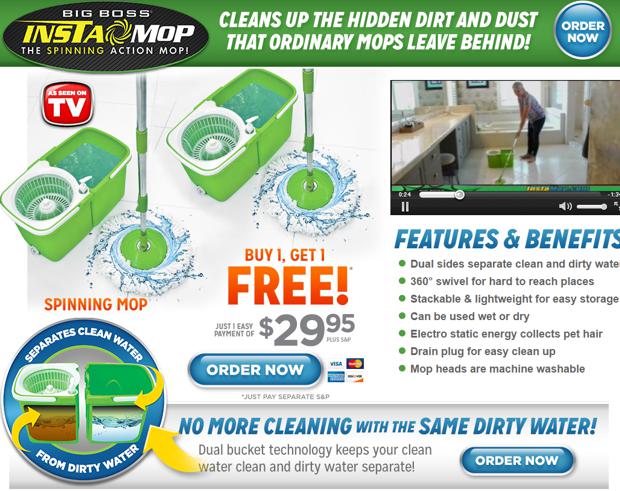 The reality of InstaMop appears to be below the standards presented in the advertising. You may want to shop around for other, more highly-rated, spin mops. If you insist on buying this one, it may be worthwhile to wait until it appears in stores.

Insta Mop by Big Boss is an As Seen on TV mop which is advertised as an improvement over traditional mops.

As of June 2015, Insta Mop is only available via the product website, Amazon, and other online retailers.

One may safely assume that like most As Seen on TV products, Insta Mop will eventually appear in stores. If you’ve seen Insta Mop for sale locally, please let us know in the comments below.

Below are some of the claims made on the official website and in the television commercial.

The television ad for Insta Mop has been running since late 2014.

Insta Mop (sometimes written as InstaMop or Insta-Mop) is a wet/dry mop which is said to clean floors better than standard mops, and includes “dual bucket technology” which makes clean-up easy and fast.

The product’s official website is instamop.com, which was registered in June 2014. This is not the first As Seen on TV product sporting the “Big Boss” name. The Big Boss SmarTop Cooker has also been advertised in recent years.

Insta Mop suffers from some of the same flaws experienced by other As Seen on TV mops, namely sub-par construction and design execution which falls short of the advertising. In the case of Insta Mop, several consumers have expressed frustration with leakage and difficulty in assembly. The technique required to spin the mop has also proven problematic for some customers. Another problem which has been found in other As Seen on TV mops is that the handle has come apart for some users. Finally, although the heads have been described as machine washable, more than one online reviewer has stated that washing them this way has led to the mop heads falling apart.

Most As Seen on TV aficionados may recall the Hurricane 360 Spin Mop, which advertised a similar design and included a foot pedal which was used to spin the mop during cleaning. That product has not had overly favorable reviews. There are many other “Spin Mops” which can be found on Amazon, some of which have solid consumer ratings. The Twist and Shout Mop, for example, boasts a 4.5 star rating among over 1800 reviews. While its design is similar to Insta Mop, it does not appear to suffer the same design flaws.

The Big Boss Insta Mop is an As Seen on TV mop which is advertised as a superior solution to traditional mops. The reality of the product, however, appears to be far below the standards presented in the advertising. You may want to shop around for other, more highly-rated, spin mops. If you insist on buying this one, it may be worthwhile to wait until it appears in stores.