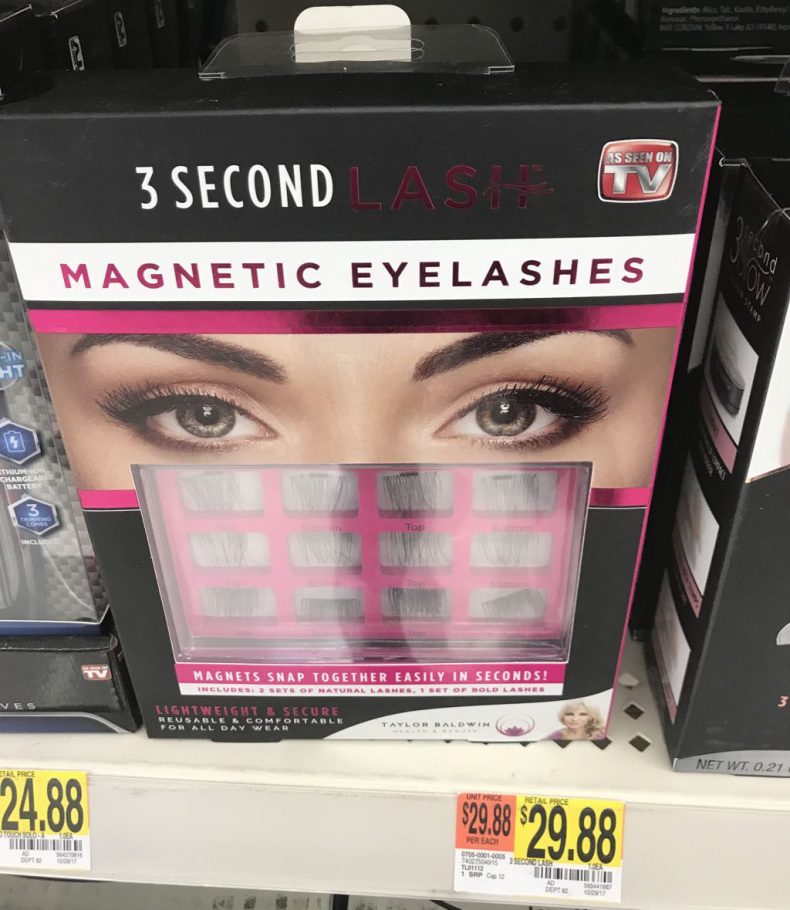 • Can be reused
• No glue required
• Easy to remove

Overall, I would guess that 3 Second Lash will appeal to about half of the women who try it. If you can get the application process down, and if you don't mind the half lash "winged" look, this could be right up your alley. If either of those are not a good fit for you, then this product might not be a good fit.

3 Second Lash is a set of As Seen on TV magnetic eyelashes that snap into place and don’t require glue. Here is my 3 Second Lash review.

If ordering from the official website, 3 Second Lash costs $29.99 + $5.99 shipping. You can also find it in store for about $30, usually on the As Seen on TV shelves. The package includes 3 sets of lashes.

It was only about a year ago (late 2016) that the idea of magnetic eyelashes took the internet by storm after a few high-profile YouTubers posted videos of them. On paper, it makes sense to use magnetic lashes rather than gluing traditional lashes onto your eyelids.

To use 3 Second Lash, you place an upper lash on top of your real lash, then grab the bottom lash (marked with a small red dot) and place it underneath the upper lash. You’ll know you have them properly aligned when they magnetically snap together. Once in place, you can wear them all day long, remove them by gently pulling them off, and reuse them over and over.

I have seen this product and a couple others just like it first-hand, and from what I can tell, most of these magnetic lashes are virtually indistinguishable from one another, at least functionally. There is definitely a learning curve involved as far as applying magnetic lashes. For example, when you place the upper lash, you are essentially dangling it on top of your existing lash while you grab the lower lash to put it in place. Looking down could make the upper lash fall off or become off-center. Some women prefer to use their fingers to place lashes, while others use the included plastic tweezers. Note that metal tweezers will magnetically stick to the lashes, thus you wouldn’t be able to place them properly.

Another feature that could make or break 3 Second Lash is the style of the lashes. They are not full-width lashes, but corner wing “half” lashes. This is a look that works well for some women, but not all. If that is not your desired look, 3 Second Lash probably won’t be for you. If that is a style you covet, these could be a good fit, as long as you are able to master the application process.

A cursory search of magnetic eyelashes on Amazon will yield quite a few results. This 8 pack (4 pair) by Nylea is currently listed as a Best Seller, and can be purchased for $16, with free shipping if you have Amazon Prime.

Overall, I think 3 Second Lash will appeal to about half of the women who try it. If you can get the application process down, and if you don’t mind the half lash “winged” look, this could be right up your alley. If either of those are not a good fit for you, then this product might not be for you.

Have you tried 3 Second Lash? Please give it a star rating and comment below.

Baebody Retinol Moisturizer Review
8.1
7.1
Be the first to comment!
Leave a reply »