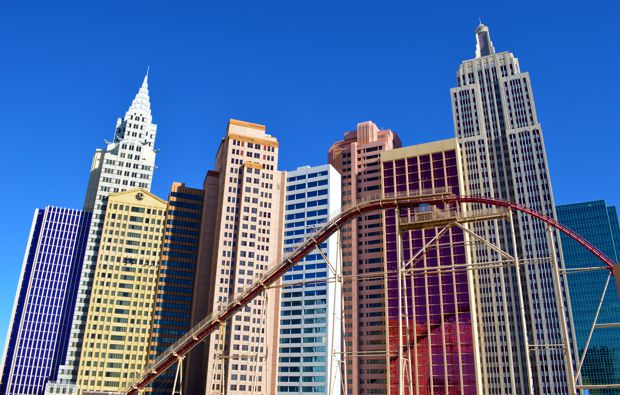 • Doesn't feel as modern as some of the newer mega resorts.
• Check-in can be slow during peak hours

New York New York still has enough to offer, and is worthy of a visit for first-timers.

This themed resort was built in the 1990’s and brought a taste of the Big Apple to Las Vegas. Its reverence of New York has itself become an iconic part of Sin City. New York New York Las Vegas is more than just an interesting building with a Statue of Liberty replica, however. Inside the walls of this “city” you’ll find shows, gambling, fine and casual dining, shopping, plus an arcade and roller coaster. Despite being nearly two decades old, the resort has not rested on its 1997 laurels, undergoing several improvements and expansions over the past 19 years.

This is a text description of our 2014 video tour of New York New York Las Vegas found below.

Our tour begins at Nathan’s Hot Dogs, and continues down the escalator into the main casino area. We pass restaurants Il Fornaio and America before arriving at the front desk. This is followed by the entrance to the street level of the Las Vegas Strip. After a high limit area, cashier, and player’s club, we encounter a couple of shops.

From here, we take the escalator upstairs, where you’ll find more food, bars, Coyote Ugly, a magic shop, and the exit to the Excalibur. Heading back into the resort, we pass the upstairs entrance to Hershey’s Chocolate World and a gift shop.

Back on the casino level, we encounter the main level of Hershey’s Chocolate World, followed by the aptly-themed bar called The Chocolate Bar, which features chocolate-inspired cocktails. We then pass the Irish pub Nine Fine Irishmen, followed by the stores Stupidiotic, Swatch, and I Love NYNY.

After passing the Race & Sports Book, we enter the food court known as Village Streets, where you’ll find an array of New York-themed street food. This leads us to the Zumanity theater. We head back upstairs to the arcade and a look at The Roller Coaster.

The video backtracks to catch a couple of locations missed in our perimeter sweep, including the Bar at Times Square in the center of the casino. Finally, we take a stroll outside of the resort along the promenade and Brooklyn Bridge, before finishing with a quick peek at the hotel pool.

Many of the highlights of the New York New York are visual representations of real landmarks in New York, such as:

I was there that cold January night back in 1997 to experience the unveiling of the latest themed casino in Las Vegas. I recall spending nearly an hour waiting in a massive line in the parking garage just to get out of my car. When I finally managed to wade through the crowds and into the resort, my thoughts then were echoed during a more recent visit in October 2014: It’s a little slice of New York here in our desert oasis. Sure, it’s not the same as visiting the Big Apple, but when you sit on a cobblestone “street” eating New York style pizza next to a steaming manhole cover, there are moments you may forget you’re in Las Vegas.


New York New York tips its hat to the real thing around every turn, including the 150-foot Statue of Liberty which faces the Las Vegas Strip, Brooklyn Bridge, Central Park, and its 12-building New York-inspired skyline. The Village Eateries is a favorite rest stop for weary gamblers and tourists, offering New York style street eats along a small neighborhood of shops.

Kids of all ages are often found up in the Coney Island arcade, or hopping on The Roller Coaster, which used to be known as The Manhattan Express.

There have been some notable additions to the property since 1997, including the Hershey’s Chocolate World, a two-story store dedicated to Hershey’s (and Reese’s). A prominent ESPN Zone sports bar which used to reside at the New York New York has since closed.

A more recent addition resides between New York New York and Monte Carlo called The Park. It offers dining and bars, and connects to the T-Mobile arena. After several delays, The Park opened on April 4, 2016

When I have friends in town who haven’t previously been to Las Vegas, I often suggest they visit New York New York, because it’s still an interesting trek around the property, even if you aren’t a gambler.

Trivia: In 2011, it was discovered that a Statue of Liberty stamp issued by the U.S. Post Office actually used an image of the replica at the New York New York in Las Vegas.

Below is a map showing the location of the New York New York, which sits at the iconic intersection of Las Vegas Boulevard and Tropicana.